Are large stocks getting larger?

This is the sixth part in a series examining the evidence behind the claim that passive investing is causing a bubble.

For the previous part, on whether passive investing is making the market more concentrated, click here.

Looking at the behaviour of the largest stocks in the world can offer us some interesting insights into who’s responsible for setting prices.

If passive investing were making the large stocks even larger, then as long as money kept flowing into passives, the largest stocks would stay the largest.

Thanks to the increasing flows to passive investing, the largest companies would all grow proportionately larger together. Buoyed by passives, which are forced to buy more of the largest stocks, they would remain the largest stocks until something managed to reverse the flows into passives and regular price discovery resumed.

A corollary of this is that if passive investing were inflating mega-caps’ valuations, we would see predominantly positive returns for the largest stocks. Passives’ mindless large-cap buying would keep their share price propped up, “regardless of fundamentals” as critics are fond of saying, and we’d see positive returns for all the largest companies.

Looking at the history of the 10 largest companies in the world since passive investing really took off in 2008, this is what we find: 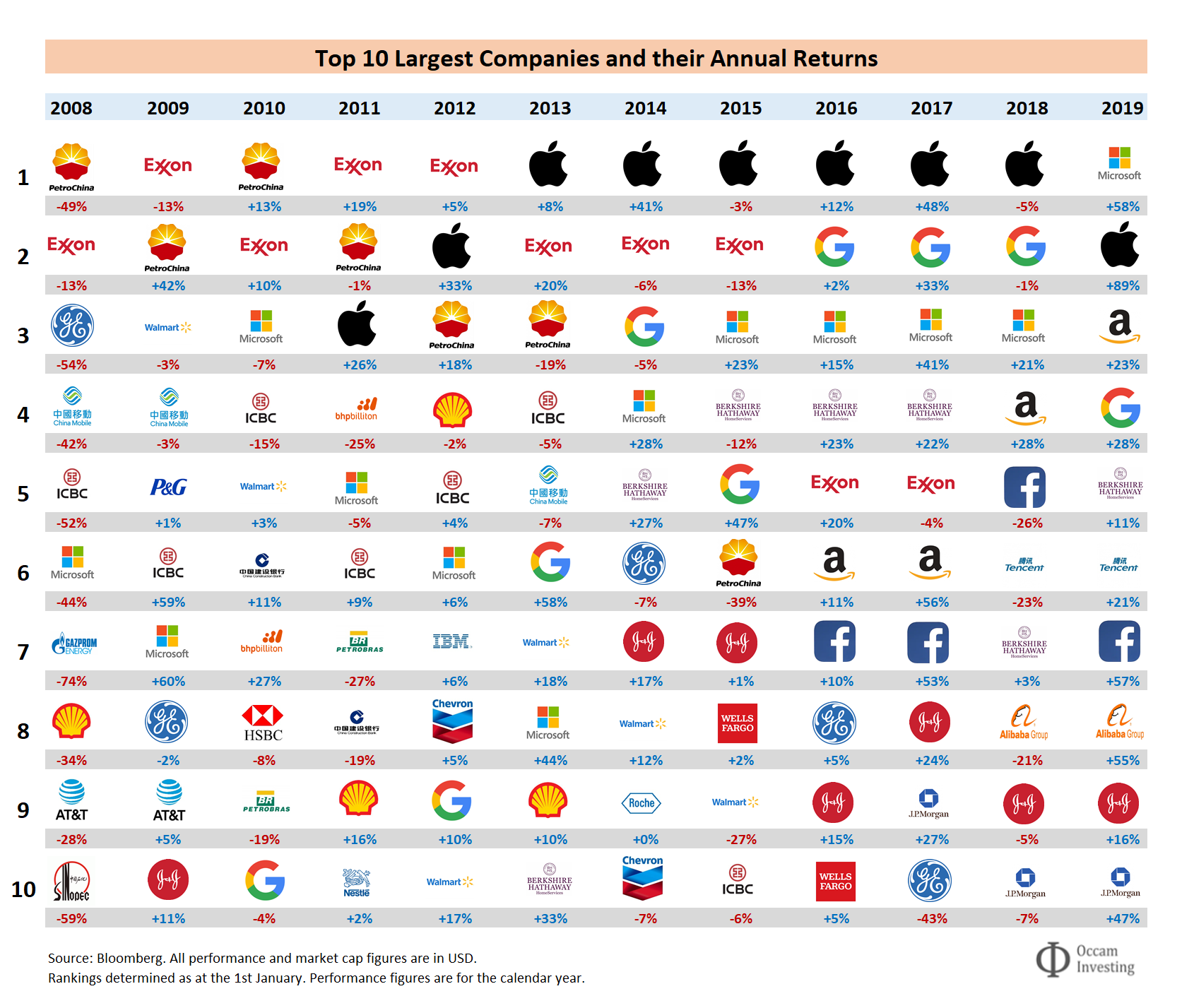 There are a few interesting things this table shows:

It’s true that tech stocks have become a prominent part of the market in the last few years. But even amongst the tech stocks, the rankings have changed. Amazon has grown from not even being included in the top 10 in 2015 to being the third largest stock in the world in 2019. Apple’s been unseated from its top spot in 2019, and similarly Alphabet has moved down the rankings to fourth largest in 2019.

If passives were making the largest stocks larger, then the relative rankings wouldn’t change – but that’s not what’s happening.

If passives were distorting the market, all the top 10 would all be rising together. Flows into passives would mean the stocks would be bought according to their market cap weight, and all their share prices would rise according to their weight in the index. But again, that’s not what we see – there’s still a huge difference between the best performing stock in the top 10 and the worst performing.

All these points show how nonsensical it is to argue that passives are inflating prices.

The fact that the top 10 stocks are still able to suffer enormous drawdowns, such as General Electric’s bone-crushing 43% drop in 2017, shows that there’s still plenty of active management setting prices – even amongst those mega-cap stocks apparently most distorted by passives. Negative returns in the largest stocks show that despite the flows into passives, active management’s ability to reduce a stock’s price through sales is the mechanism for setting a stock’s price. The top 10 stocks have seen at least one of their cohort post a negative return in 10 of the last 12 years.

In fact, we can broaden this point out and apply it to the larger market.

Research from Dimensional has shown there’s still plenty of dispersion outside of the top 10 largest stocks: 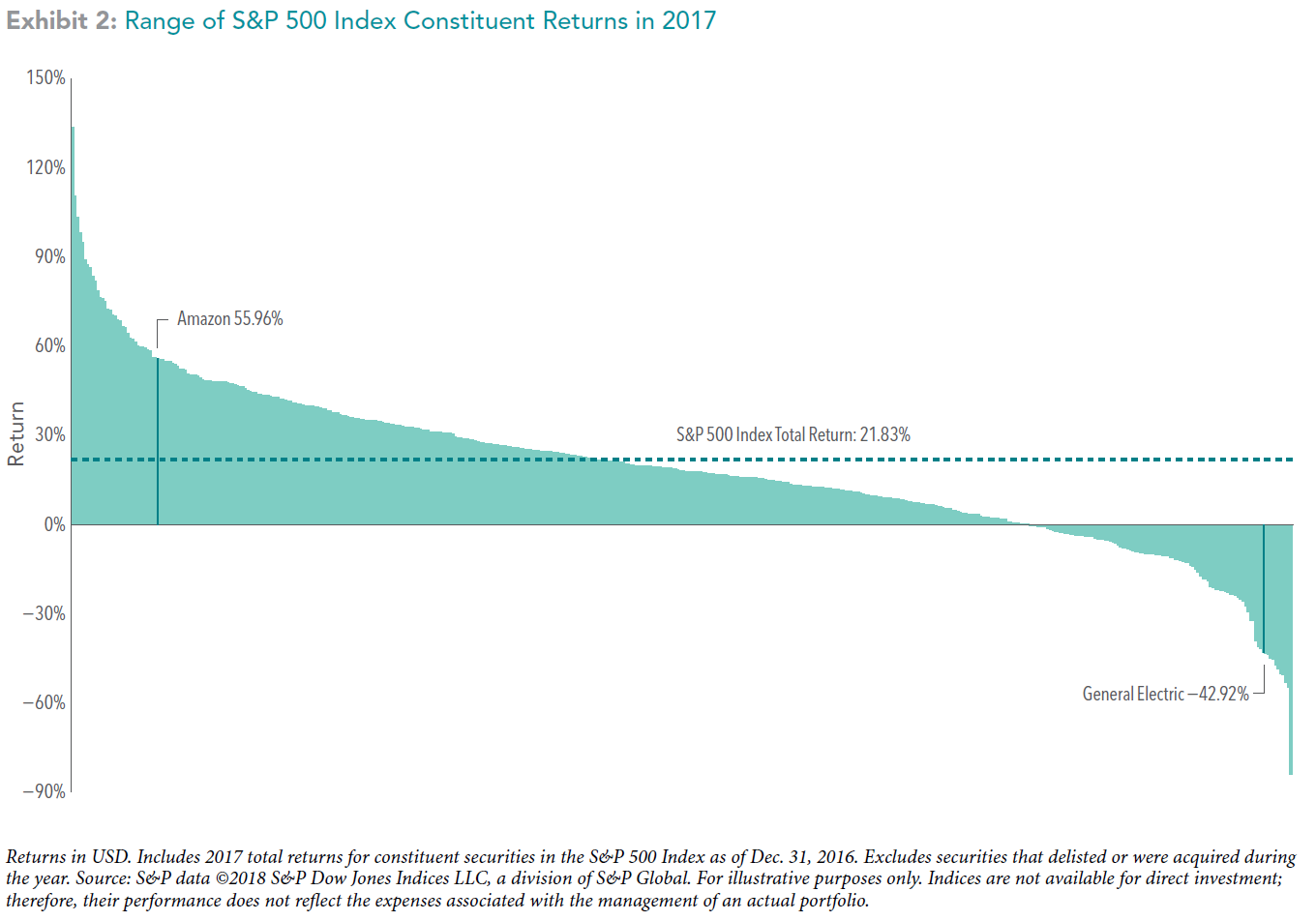 Dispersion of returns creates a problem for those who argue that passives are forcing share prices up, because large selloffs in individual stocks can only be attributable to active investors deciding to sell that particular stock.

We’ve seen large negative returns within the top 10 are common, with GE being a striking example. The stock peaked at being the 5th largest stock in the S&P 500, before crashing down to 40th place – all despite the huge flows into passives during that time.

Facebook is another good example. In July 2018, Facebook saw a single-day drop of 20%, which was the largest single market cap fall in history: 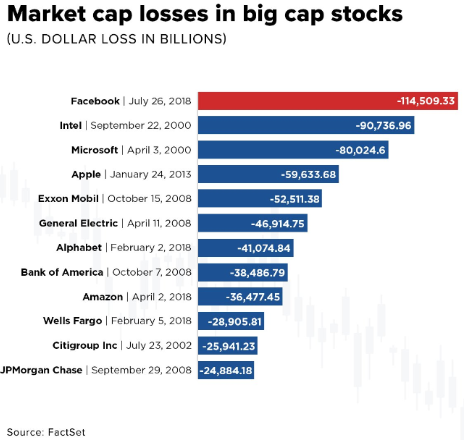 If inflows to passives cause increases to prices, then it follows that falls in prices must be because passives are selling. If passives were responsible for the overvaluation of Facebook, the overall market would have sold off by the same amount, as they would be selling proportionate amounts of all stocks in the S&P. But that’s not what happened – Facebook fell much more than the market.

The fact that the market fell 0.3% and Facebook fell 20% shows that it was active investors setting the new price for Facebook, not passives.

Research from Morgan Stanley has also shown that dispersion in stock returns has remained largely constant for the last couple of decades:

The rise of passives hasn’t reduced dispersion at all.

If passives were inflating prices, we’d see little change in the membership of the top 10, and similarly little change their relative rankings. We’d also see far fewer negative returns among the largest stocks.

Starting by examining the largest stocks in the world, those most accused of being distorted by passives, we’ve seen that:

These findings all indicate that actives are clearly still responsible for setting prices. Passives, being price takers rather than price makers, are simply accepting the prices that actives are setting.

It’s hard to see how they can be blamed for distorting the market.