I’ve included links to the source data, and included my own highlights below each chart.

All data is taken from the Office of National Statistics (ONS), and is accurate as of 2022.

For household data, I’ve omitted the 16-24 age group, as those under 25 had their data skewed by those living with parents, resulting in very high household wealth.

Pensions are a large part of our savings, so rather than go into the stats on average pension sizes here, I’ve written a more detailed post here: ‘Average pension pots [UK]‘.

Source: ONS. Savings include the values of any financial assets held including both formal investments, such as bank or building society current or saving accounts, investment vehicles such as Individual Savings Accounts, endowments, stocks and shares, and informal savings. Net financial wealth relates to net financial wealth for the household. Therefore charts show individuals of any age living within households of this wealth.

Sources are ONS for both employee and employer contribution statistics (DC plans only). These stats are employer-specific rather than dependent on individuals’ saving behaviour.

UK household net worth by age

Source: ONS. Total wealth is the sum of the four components of wealth and is therefore net of all liabilities: Property, financial, physical, private pension.

Average UK net worth by age: 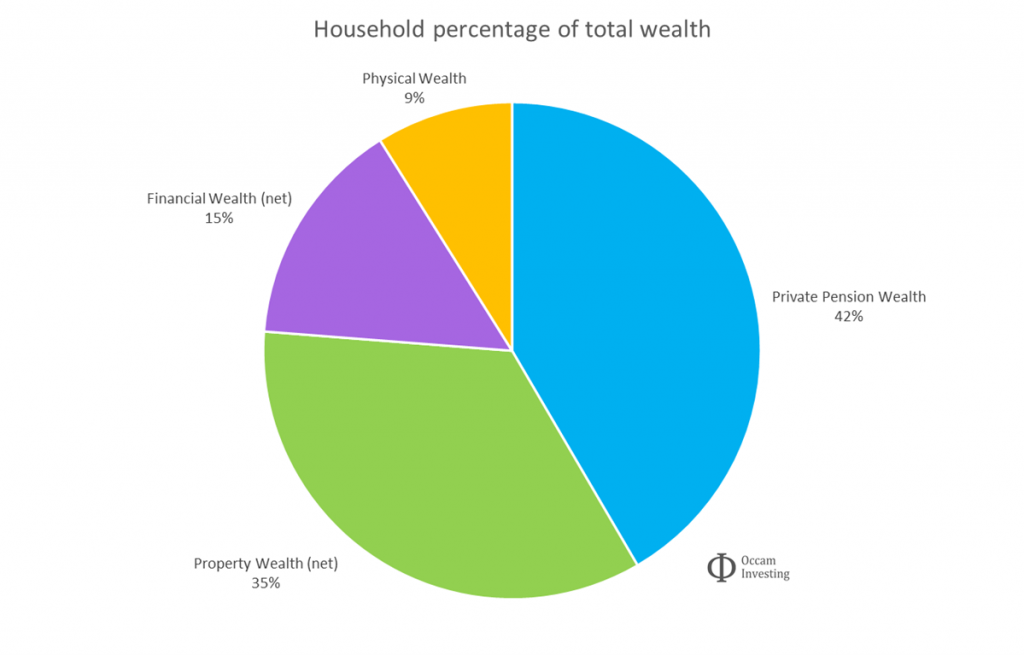 How long would you be able to make ends meet if you lost your main source of income? 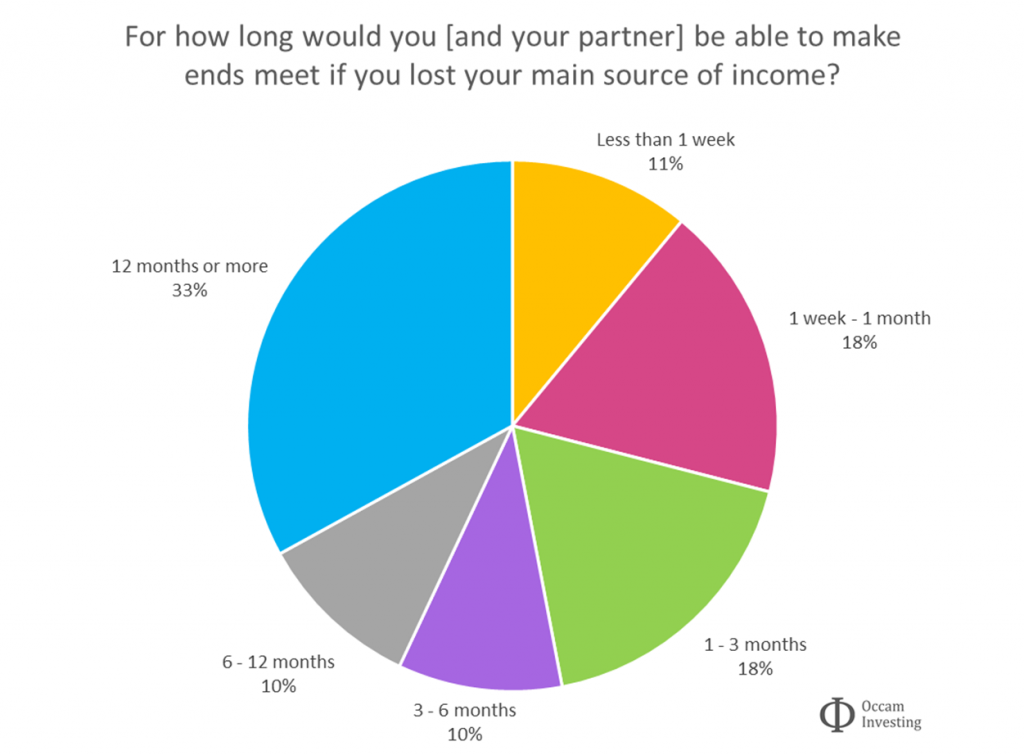 How would you find the money to meet an unexpected expense? 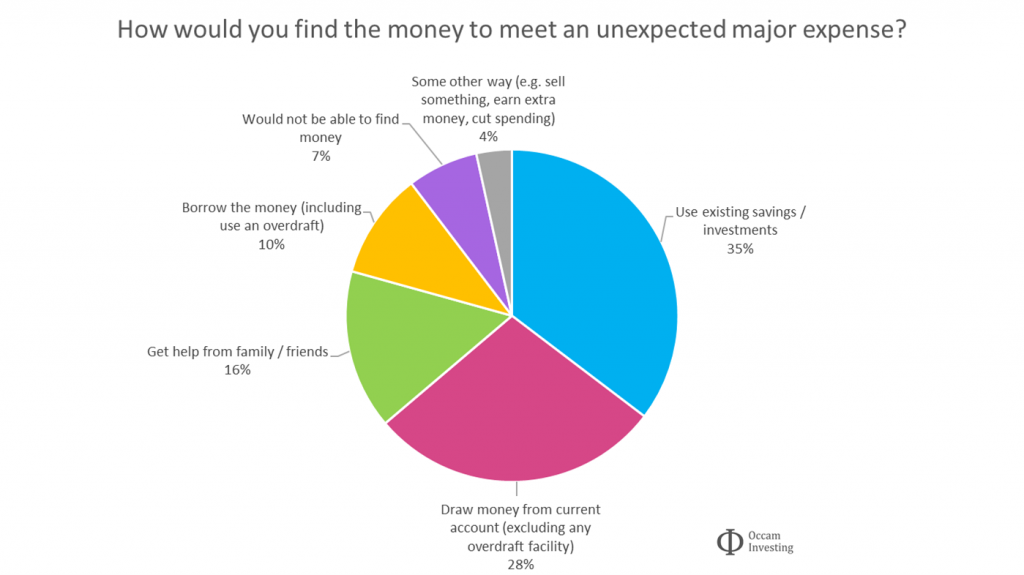 Source: ONS. A major expense is defined as an expense equivalent to your whole income for a month or more.

How confident are you that your income for retirement will give you the standard of living you hope for? 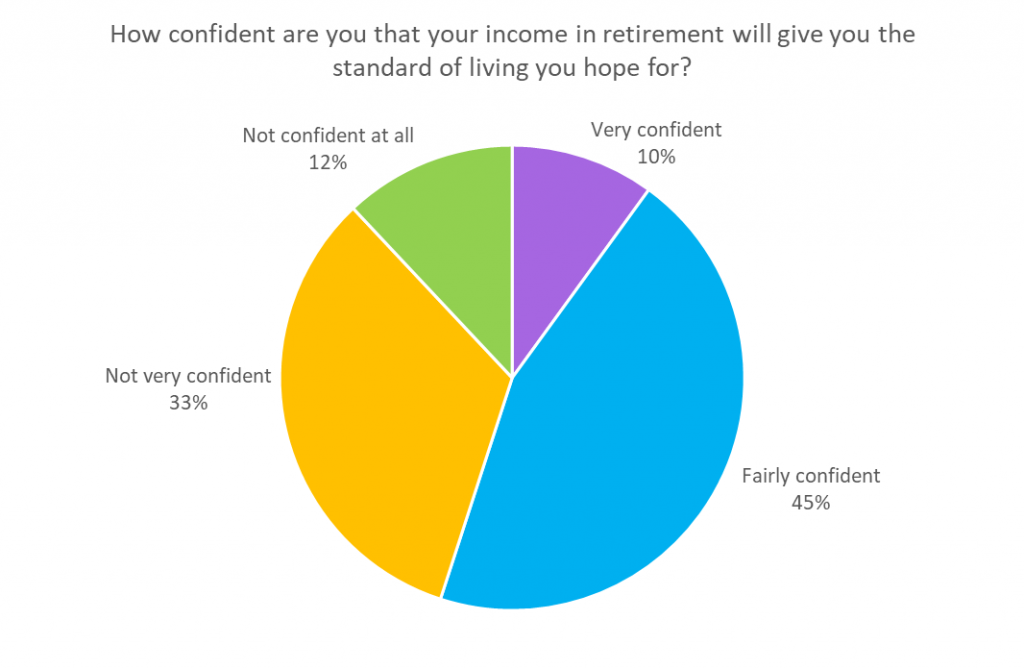 An obvious point, but still one worth making, is that personal finances are just that – personal. How much you should have saved, or invested, or in net worth is completely dependent on your own circumstances and goals.

Someone intending to retire at 35 and spend their retirement cruising the world on their superyacht, sipping Dom Pérignon and eating meals prepared by their personal chef is going to need a savings pot resembling Scrooge McDuck’s hoard of gold. As a result, that shouldn’t be the benchmark for someone intending to retire in their late 50s, who wants to travel occasionally, take up a hobby, and spend time with the grandkids.

Having said that, the fact you’re reading this blog means you’re highly likely to be in a better financial position than most, given that an interest in investing puts you ahead of 99% of the population.

For those looking to improve their financial situation, and who want to learn more about investing, this section on The Basics might prove to be a useful starting point. It covers topics including Am I ready to invest?, How much do I need to start investing?, and How do I invest?.

If you feel like you already know the basics, but are wondering what you should be investing in, this post ‘The best Vanguard index tracker funds for UK investors‘ is by far the most popular post on this site. It walks you through the various Vanguard equity funds on offer, and provides my opinion on the best options. Its sister post ‘The best Vanguard bond funds for UK investors‘ does the same thing for Vanguard’s bond funds.

Can you please state what your sources were for this article? The notion that 37% of 25-34 year olds have a net worth of over £200,000 seems completely absurd.

THe ONS is the source for all the charts. The net worth figures include property, so I’m guessing the 37% is mostly those able to get on the property ladder earlier.

Except the actual ONS stats show 19% of households between the ages of 25-34 year olds have a net worth of over £200k?

I’ve just re-downloaded the ONS source data I used for the article here, and the 37% looks correct – Table 2.11, summing cells F62 to I62. Maybe you’re looking at a different ONS report? Where are you seeing the 19%?

Ah, I see. It looks like the way you worded it is incorrect. It is household net worth, and therefore how many individuals in that age cohort live in a household with that net worth. For example, a 25 year old with a net worth of zero, who lives with her parents that have a net worth of £1.5 million would fall into the £1 million+ household category, not that she herself has a net worth of over £1 million.

Yes, you’re absolutely right – all the stats in the article are household stats. I do caveat the post in the introduction, but apologies if it’s unclear!

Really interesting breakdown and analysis. Thanks for sharing. Always intriguing to see a countrywide statistical representation – I was also surprised by the figure of how long people can seemingly stay afloat if they lose their main source of income. Especially after all the scaremongering during Covid and job insecurity at the time, I thought it would be much worse.