Have bonds ever failed?

We’re in a weird period for bonds right now.

So should we still be investing in them?

The purpose of bonds is to act as a diversifier to equities, and (hopefully) act as a hedge – i.e. go up when stocks down. They’re there to make drawdowns less painful, and to give you something to sell so you’re able to buy equities when they’re cheap and you need to rebalance.

But are there any situations where bonds don’t act as a diversifier? And if so, what are they?

This is a useful question to think about. If it turns out that bonds don’t perform well as a diversifier in a specific situation – say, during periods of sub-1% interest rates, or perhaps when bonds become positively correlated with stocks – then this will likely affect how we construct portfolios. We might need to consider alternative diversifiers in our portfolio if we can’t rely on bonds to do the job.

So let’s find out whether bonds have ever failed in their role as diversifier.

We’ll start off with the most relevant market for UK based passive investors – the market-cap weighted global index.

As this blog is aimed at UK investors, we’ll be comparing the global market’s performance with a global bond index hedged to sterling.

For selecting drawdowns, I’ve used the usual maximum drawdown methodology for finding the largest peak-to-trough falls. Any drawdowns over 10% are included. But if there were additional drawdowns over 10% during the recovery from the trough to the previous high, these are also included. This makes sure we capture every drawdown greater than 10% (as the usual maximum drawdown calculations don’t include any drawdowns experienced in the recovery).

Now let’s have a look at some charts.

Here’s how global bonds hedged to sterling have fared during past global market drawdowns: 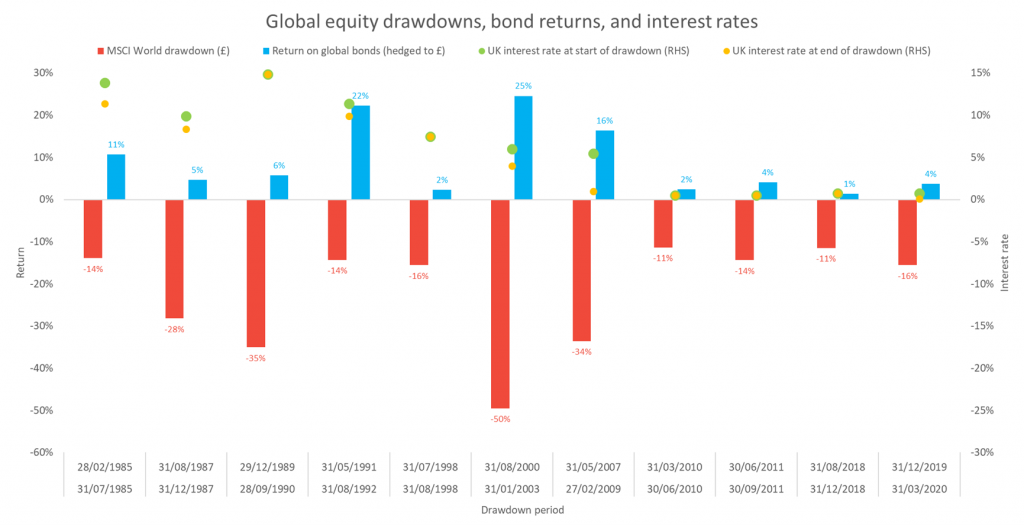 Here’s the data in tabular form, along with information on the levels of the stock/bond correlation at the start of each drawdown:

So overall, bonds are looking very good so far.

Sadly I only have data for global bonds going back to 1985. (If anyone knows where to get global bond data hedged to GBP pre-1985, please let me know!)

This is annoying, because bonds have been in a huge bull market since the 1980s thanks to the outrageously high yields on offer to bond investors in the 80s (NB: bonds have not been in a bull market due to falling interest rates, as I wrote about here). So most of our data, as it starts in 1985, covers periods with relatively high interest rates – we only have four periods where rates are sub-1% at the start of the drawdown. Although bonds still performed admirably during those four periods, it would be useful to find some more examples of how bonds perform vs equity selloffs during periods of low interest rates.

US equities vs US bonds

Using the same methodology as described for the global stocks vs global bonds example, here’s the data for the US: 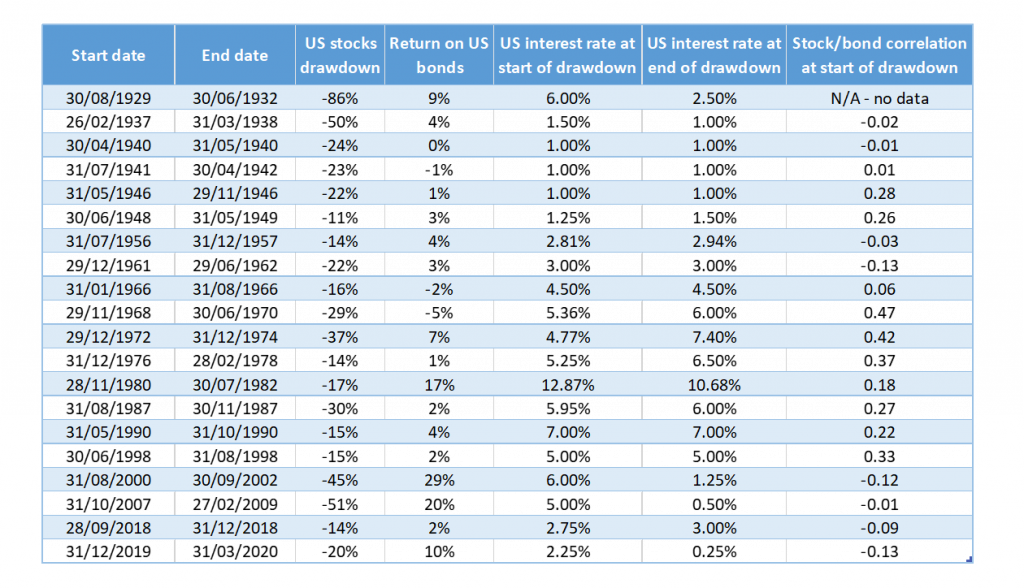 Sources: Stocks: Bloomberg, bonds: Shiller data, interest rates: FRED. Equities are the S&P 500 Index (total return). Bonds are the US 10-year government bond return. The stock/bond correlation is the preceding 5-year correlation based on monthly data. All performance data is in USD.

There’s loads of data to unpick here, but here are a few highlights:

We saw bonds had done well hedging crashes for UK investors in the global market, and it looks like bonds have done similarly well in the US – and for a very long time.

Finally, I thought it would be worth taking a look at Japan.

“Now show Japan” is very often shouted across the internet to anyone who’s trying to prove any kind of investment point. Japan has such a unique market dynamic that many investment theories which hold up outside Japan are proved totally useless in the Japanese market.

It’s also useful for us to look at Japan because, although we in the UK have only recently had the pleasure of dreadful interest rates, Japan have had sub-1% interest rates since 1995. That gives us another useful dataset to find out whether low interest rates impair the ability of bonds to hedge equities.

Straight to the good stuff: 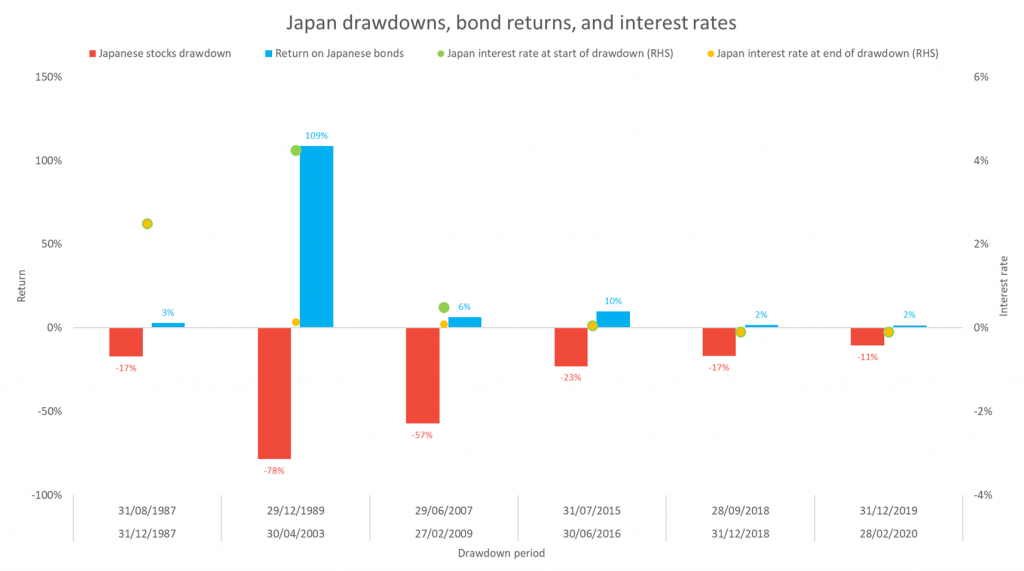 Sources: Stocks, bonds, and interest rates: Bloomberg. Equities are the Nikkei 225 Index (total return). Bonds are the FTSE Japanese Government Bond Index. The stock/bond correlation is the preceding 5-year correlation based on monthly data. All performance data is in JPY.

First of all, wow.

I knew it would’ve sucked to be a Japanese equity investor, but that chart really puts it into perspective. I can’t imagine losing 78% of my portfolio then, during the recovery, watching it fall over 50% again. If that wouldn’t put you off investing for life then I don’t know what would.

If you’d invested at the market peak in 1989, you would’ve only broken even in December of 2020. That’s 31 years of sitting on a loss. I wrote about all the reasons it’s not a good idea to invest in a single country’s market here (including the FTSE 100 or S&P 500), and Japan is a great example of why.

Thinking about the ability of bonds to hedge equities, obviously the Japan data is massively skewed by the monster drawdown between 1989 and 2003. This was the reason Japan adopted its zero/negative interest rate policy so much earlier than the rest of the world. But still, there are a few interesting things we can see from the data:

Despite Japan’s reputation for being the market where investing theories go to die (or, at least be disproved), the idea that bonds are able to hedge equities when interest rates are low holds up especially well in Japan.

Overall, bonds have done an excellent job at hedging equities.

As I was putting this analysis together, I was surprised at how well bonds had done during low interest rates. I’d have thought that the reduced levels of income from bonds in low yielding environments would reduce their ability to generate positive total returns during selloffs. But it looks like this was compensated for by price appreciation through people engaging in a ‘flight to safety’ – people just like buying bonds when equities fall.

Hopefully this has provided a bit of hope for bond investors. While the returns on bonds are much lower than they’ve been in the past due to low interest rates (I wrote about this here, in ‘How to predict bond returns’), if history is anything to go by, bonds are still very likely to serve their function as a hedge against equities when markets fall.

So to answer the question of whether bonds have failed in their ability to diversify equity exposure during selloffs – I’d say the answer is a resounding no. I’m still more than happy to hold them, and still believe they’re the best hedge against equities you can find.

How would you take into account quantitive easing in the example of global hedged to UK? Obviously this helped with those most recent drawdown but isn’t this situation unprecedented?

You’re right, the levels of QE have been off the charts. But the effect of all the QE has already fed through to the bond market in the form of lower yields – central banks buying bonds boosts their prices, so lowers their yields. And low bond yields (as seen in the post) have been seen a few times before.

As for how the market reacts to QE tapering, it’s impossible to say – this a forecast-free blog. What I’m confident in, though, is that high-quality government bonds will continue to have the highest chance of providing protection in a crash, because investors tend to engage in a ‘flight-to-safety’ during drawdowns. And this will be true as long as humans are in charge of decision-making in financial markets (i.e. always). And even if the bond market becomes so distorted that bonds don’t manage to rise when equities fall, they’ll always fall less than equities because they’re simply a less risky asset class. So even in the most extreme scenarios, they’ll still make your equity bucket easier to stick with, which is what they’re there for.

Thanks for another insightful analysis. I’ve read your other articles on diversifiers and drawdowns. I’d be very interested to hear your thoughts on commodity funds as growth drivers and an inflation hedge, ex gold. It seems sensible to include one as part of a long term balanced diversified portfolio.

Hi David,
I’ve got plenty of research piled up on inflation hedges – it’s just finding the time to write it all up!
Thanks,
Occam

Great article. Creates a warm feeling still owning bonds despite half of the internet screaming it’s stupid to. Thanks!

AGBP is a global aggregate bond fund, so includes corporates – which means it’s not likely to provide the same level of protection as a pure government bond fund (it’s got c.50% of the fund in high credit quality AA/AAA bonds, vs a global government bond fund which will have c.70%). Different diversifiers will also provide varying levels of protection during each crash, which is why it’s useful to look at multiple past crashes rather than just the most recent one, so we can pick the one which does a good job most of the time (which is all we can hope for).

Buying a super short-dated government bond fund (in sterling, rather than USD), is an option for providing protection, but 1) won’t return much more than cash over the long run (especially after fees, given the extremely low yields at the moment), and 2) won’t provide as much protection as longer-dated/duration-matched bond funds during crashes.

Hi Occam
thanks for the reply; not an obvious choice then for which bond funds to buy to provide crash protection given that longer date bonds are likely to suffer both from interest rates rises – even if these are modest – and inflation
best wishes
Nicholas

You’re right – which is what keeps things interesting!