How much money is in the world?

And what’s the point of having a blog if you can’t answer interesting questions?

How much money is held in:

How much money is in the world?

It depends what you class as ‘money’.

Do you just include what’s held as physical cash – the notes and coins in our wallets?

What about money held in bank accounts? Is that also ‘money’? How about what’s invested in the stock market? Or real estate? Or debt? Or derivatives?

The numbers are going to run into the trillions, no matter how we measure it. There’s a lot of money in the world.

The number ‘1 trillion’ is so large that it stops being a number and becomes more like an abstract concept. So let’s make it more concrete.

To give you an idea of how large one trillion is:

1 billion seconds is just over 31 years.

For an excellent visualisation of just how large 1 trillion is, have a play around with this graphic.

So when we say that there’s over $1 trillion in cryptocurrencies, for example, that gives the number some context. 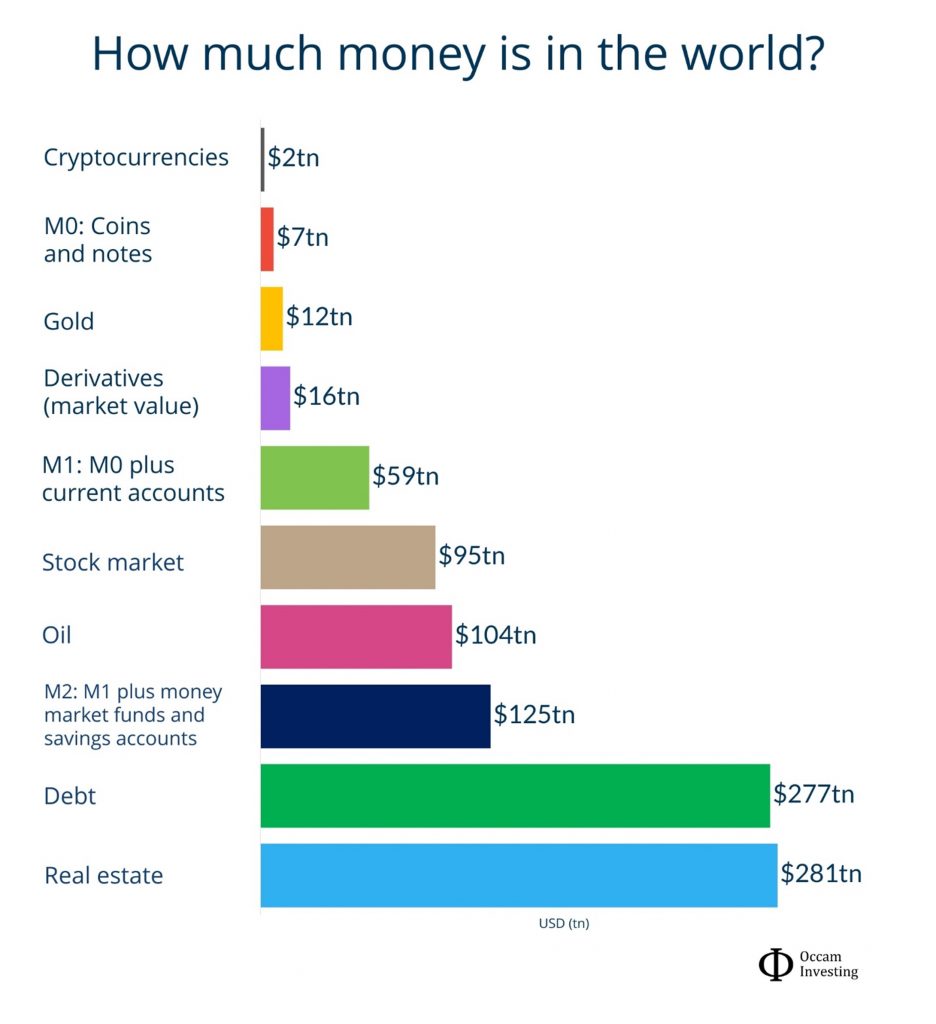 How much cash is there?

To start with, let’s keep it simple.

Typically, different types of money are classified using ‘M’s. They range from M0 (the narrowest definition of money) to M3 (the broadest).

‘M0’ represents the value of all physical currency in circulation, including coins, notes, and bills.

If we use this definition of money, there’s around $7 trillion of physical currency in the world.

‘M1’ represents all of the currency in the M0 money supply, plus some slightly less liquid forms of money, such as cash held in current/checking accounts, as well as all the money in travellers’ checks.

By this definition, there’s around $59 trillion of money in the world.

‘M2’ is the broadest definition of money. It represents everything in the M1 supply, plus all of the money held in money market funds, savings accounts, and any other forms of money which are easily converted to cash. These additional forms of cash are slightly less liquid than M2 money.

Using this broadest definition of money, there’s around $125 trillion in the world.

(NB: There used to be an ‘M3’ measure, which was M2 plus other, less liquid, elements of the money supply. The Federal Reserve stopped tracking the M3 money supply in 2006, because all valuable information on economic activity was already available in M2.)

This means that there’s 17 times as much cash held electronically than in cash form. 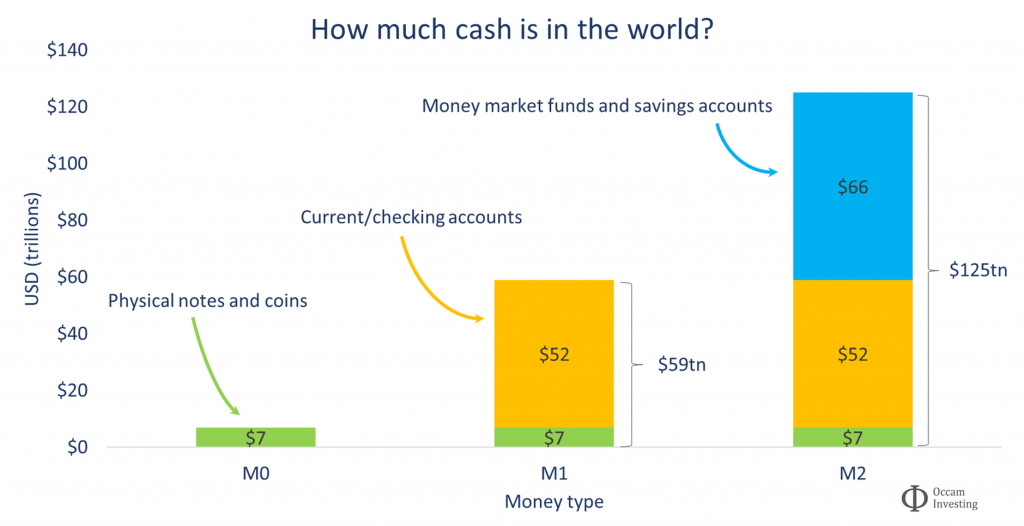 These definitions of money aren’t perfect, however.

They exclude not only the value held in cryptocurrencies (which is growing rapidly), but also the value of any money held in longer-term assets, such as the stock market or real estate.

The current market capitalisation of all cryptocurrencies is around $1.7 trillion.

The value of the stock market, global debt, and real estate

Currently, there’s around $95 trillion invested in the stock market, compared to around $277 trillion in global debt, and $281 trillion in real estate.

The size of the derivatives market

Figuring out the size of the derivatives market is slightly more complicated.

There are two ways of valuing it: using market value or using notional value.

The notional value accounts for the total value of a position, while the market value is the price at which that position can be bought or sold in the marketplace.

An example that illustrates the difference between notional value and actual market value can be found in popularly traded derivatives, interest rate swaps. The large principal amounts of the underlying interest rate instruments, although usually included in the calculation of total swaps value, never actually trade hands. The only money traded in an interest rate swap is the vastly smaller interest payment amounts—sums that are only a fraction of the principal amount.

Some argue that the notional value calculation doesn’t reflect reality – that the financial instruments the derivative is pegged to don’t accurately represent the actual market value of their derivative contracts.

If we use the market value measure, the size of the derivatives market is about $15.5 trillion.

But using the notional value calculation, it’s over 30 times larger, at $559tn ($449 of which are in interest rate derivatives).

Using the total volume of all oil reserves, we can estimate the current value of all oil in the world.

According to BP, there’s about 1.73 trillion barrels of oil in global reserves at the moment.

At a price of $60/barrel, that gives a valuation of roughly $103.8 trillion for the value of all the extracted oil in the world.

We can perform a similar exercise for gold.

These numbers are far from perfect. We’ll never really know how much money is in the world. We’re excluding all private market debt, all money held in private company equity, anything held in land, smaller commodities, or collectibles. I’m sure there are more I’m forgetting, but the point is that there’s a lot of stuff out there which has value, and isn’t captured in conventional data.

But the numbers do at least give an interesting perspective on the relative size of the world’s major asset classes.

Summary – how much money is in the world: