This is the fifth part in a series examining the evidence behind the claim that passive investing is causing a bubble.

For the previous part, on whether passive investing causes market crashes click here.

“Last year was a particularly narrow year for the stock market.”

If you’ve ever read a market commentary from your investment manager, I’m sure you’ve heard this one before. It’s a common aphorism in the investment world, and one that’s often alluded to by underperforming managers, who use the idea that the market was driven by a small number of stocks to excuse their performance.

The thrust of the argument is often bolstered by the idea that passive investing is somehow the cause of the market’s tendency to be driven by a concentrated number of stocks or sectors.

As we’ve seen, passive investing has no impact on prices. However, the idea that passive investing is causing the big stocks to get bigger, inflating a bubble, and therefore making it difficult for those not invested in those stocks to outperform, still sounds persuasive.

The problem is, the market has always been concentrated in the largest stocks.

So by one measure, the market has become even less concentrated than it was 10 years before passive investing even existed.

The market was unusually concentrated in the 1960s, but even if we chart how much of the index the top 10 stocks represented over time, it’s clear that there hasn’t been much of a change in concentration since the 1980s:

For those interested, the top 10 companies since 1980 and their relative weights are below:

This finding, that the market concentrations has remained constant since the 1980s, has been confirmed by several different sources: 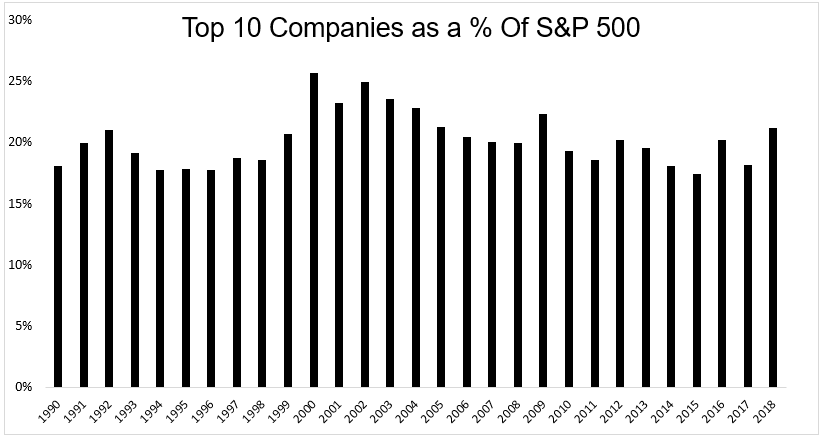 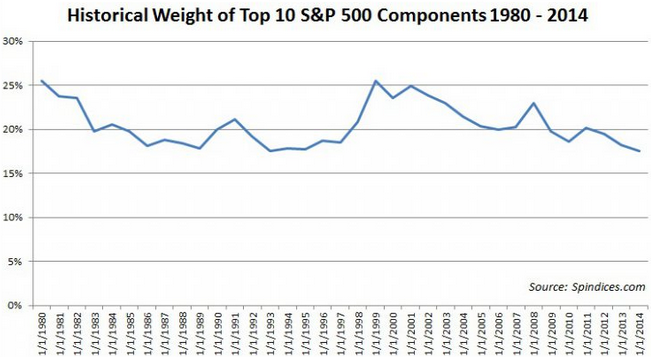 And it hasn’t been just in the top 10 stocks where the concentration reduced since the 1960s, then has stayed constant since the 1980s – the results are almost identical for the top 5 stocks: 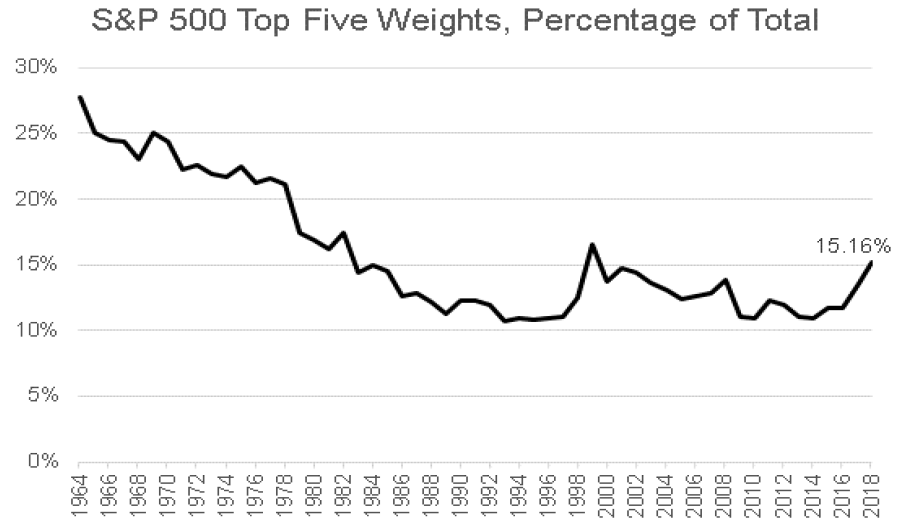 So whether you’re looking at the top 10 or the top 5 stocks, equity market concentration clearly hasn’t exploded alongside the growth of passive investing.

Using a different methodology, a slightly different spin on equity market concentration has been demonstrated by research by Vanguard. The chart below plots the change in concentration of public equities over time, using three different measures: 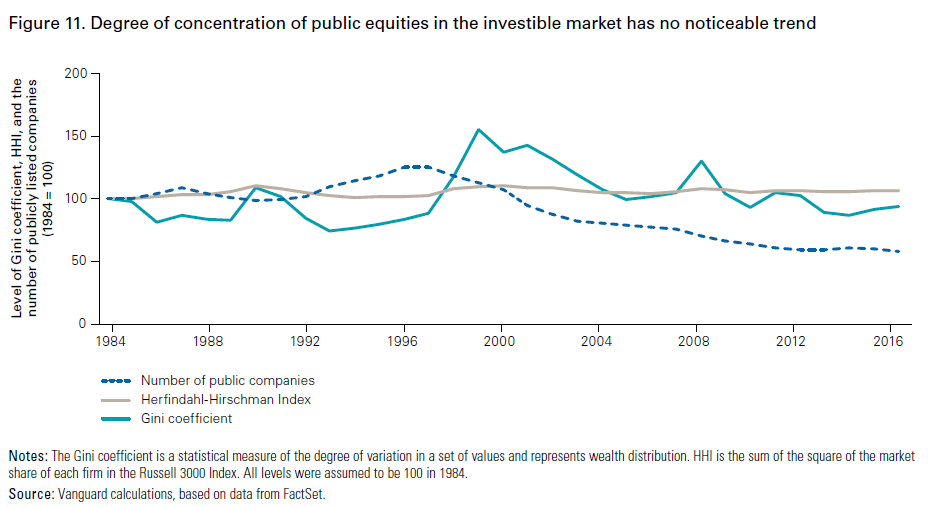 Coming to a similar conclusion, the research shows that by using whichever measure you prefer, the market hasn’t become any more concentrated than it was in 1984, when indexing had only just begun to get going.

Further research from AQR shows the impact of removing the N stocks with the biggest positive impact on the index’s returns – comparing 2015 to the previous 20-year average. 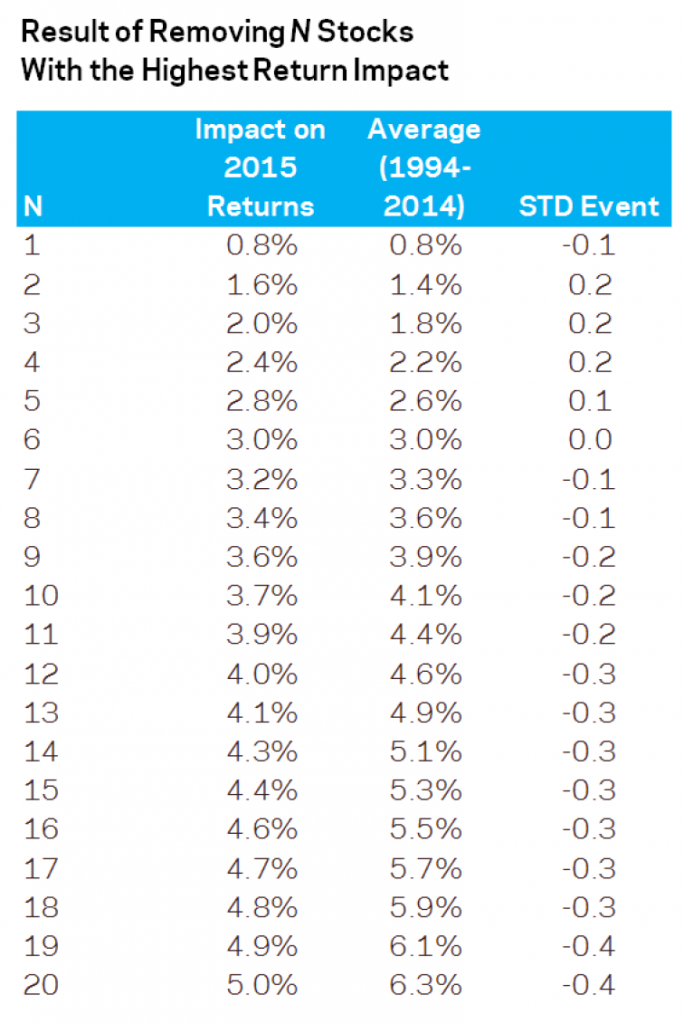 The table shows that removing the top N stocks in 2015 had the same impact on market returns as it did for the period 1994-2014. In other words, the biggest stocks haven’t had any larger impact on returns in 2015, when passive investing was dominating fund flows, than for the previous 20 year period.

One final take, this time by OSAM, shows that the pareto principle holds just as well for equity market concentration than elsewhere: 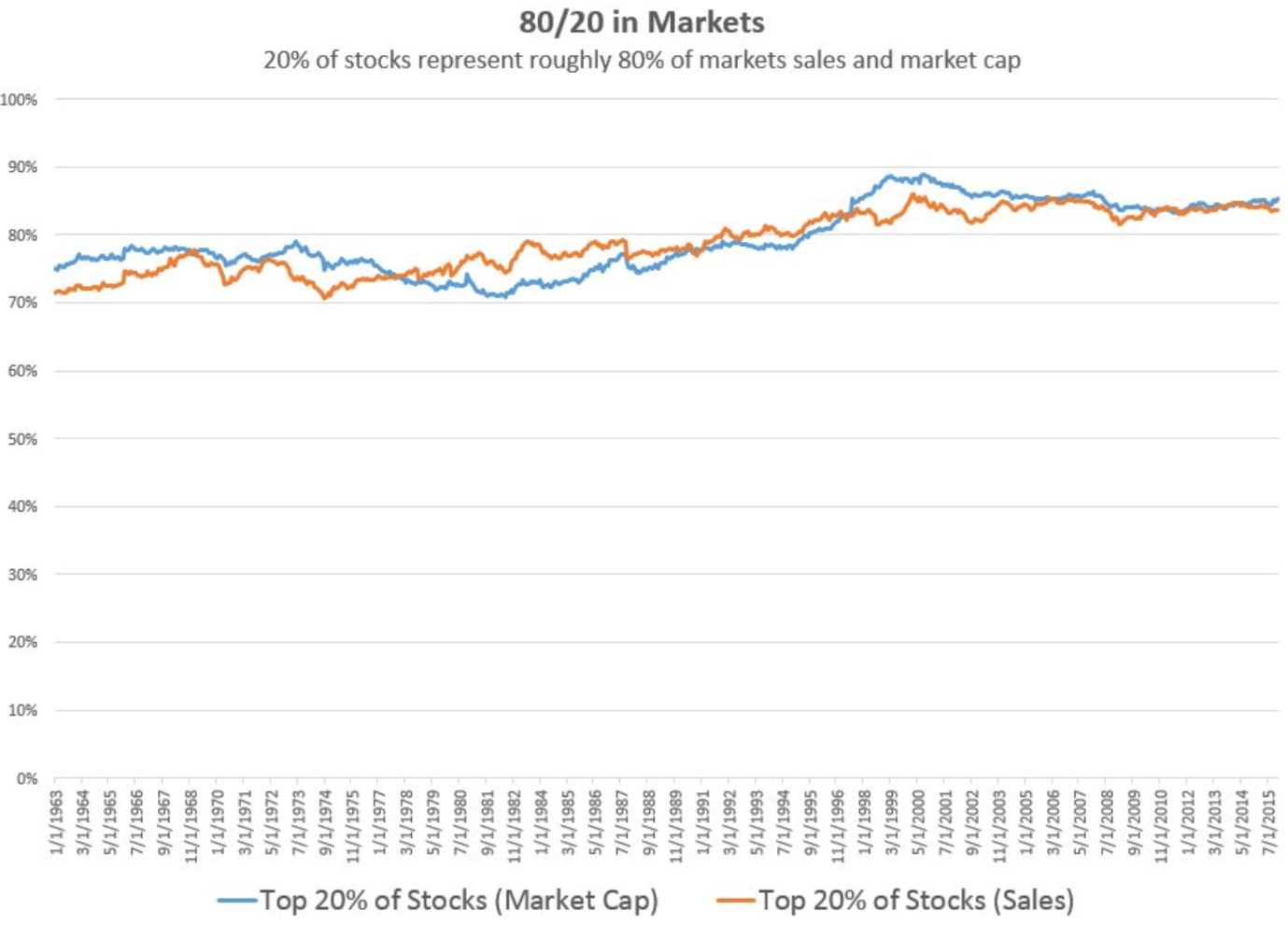 Whichever way you choose to look at it, markets have always been concentrated in the largest stocks, and passive investing hasn’t increased concentration.

If you think back to Sharpe’s Arithmetic of Active Management, it shows that active managers create the market portfolio. The idea that passive managers, who merely track the market created by active managers, are changing the composition of the market and increasing its concentration in a few stocks doesn’t hold water.

The evidence shows that market concentration has remained largely the same since the 1980s, and has become markedly less-concentrated since the 1960s – 20 years before passive investing existed. The rise of index investing hasn’t caused the market to become any more concentrated, “narrower”, or helped to fuel a bubble in a few large stocks.

This becomes evident after examining: