This is the third part in a series examining the evidence behind the claim that passive investing is causing a bubble.

For the previous part, on how much of the market is passively invested, click here.

In the previous section we looked at whether enough of the market was invested in passives to cause a bubble.

But it isn’t the quantum of assets invested in a strategy which set the prices of securities – it’s their trading volume.

If a market has low levels of trading, it implies that few investors have enough of an opinion on the stocks to trade. With few investors trading, prices move less frequently. This means there’s a higher chance that some of the stocks are mispriced.

If a market has high levels of trading, it implies that many different investors have opinions on the stocks. Prices adjust rapidly to new information, and there are fewer exploitable mispricings.

In each type of market, it’s the trading volume that sets the prices. If good news is released on a stock in a highly illiquid market, the lack of volume means the share price may not accurately reflect the good news. In a highly-traded market, every facet of the good news is absorbed almost instantaneously, and the stock price will change to reflect it.

Put simply, stock prices are set by trading activity – if there are many more buy orders than sell orders, prices go up, and vice versa.

So for passives to be causing a bubble and affecting prices, they must form a large part of trading volume.

Before we look at the evidence, it’s first necessary to understand a couple of things. Firstly, passive vehicles include both ETFs and index funds. We’ll be looking at the effect of both in this section. In terms of how each vehicle trades, index funds trade like a regular fund and so affect securities prices as any other fund would. ETFs trade slightly differently, and so have a different impact on the underlying securities’ prices.

In order to understand the impact of how passive investing affects trading volume, we first need to quickly understand how ETFs trade.

Shares in an ETF trade like shares of any other stock on a stock exchange (hence the name “exchange traded fund”), which is referred to as “secondary market trading.”

These trades occur without necessarily causing the underlying stocks to trade. In the event of a deviation between the market value of the underlying stocks and the price of the ETF shares, a financial institution known as an “Authorized Participant” may choose to enter into a creation or redemption transaction to take advantage of such arbitrage opportunities and either deliver a basket of stocks (creation), or request a basket of stocks (redemption). This is known as “primary market trading”.

For those interested, Blackrock have a good introduction to how ETFs trade in the FAQs of this research article (p67).

So the real question isn’t, “How much ETF trading activity occurs on the secondary market?” (as this doesn’t affect the prices of the underlying stocks), but is instead, “How much primary market trading is caused by the ETF creation/redemption process?”

The chart below from Blackrock is a good place to start.

It puts the idea into perspective, showing the relative effects of different vehicles on trading volumes: 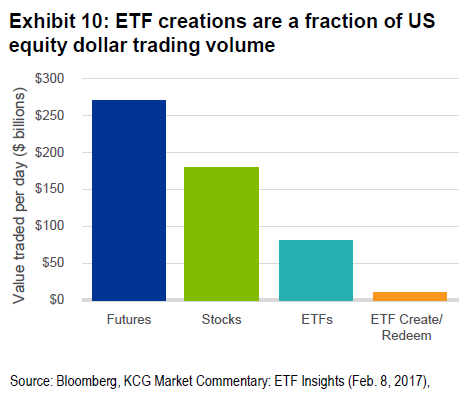 It’s clear that while ETFs trade more on the secondary market, primary market effects (i.e. the transactions which affect the underlying stock prices) are minimal – and dwarfed in comparison to futures and stock trading volume.

Putting some numbers to it, evidence from the Investment Company Institute shows that over 90% of ETF activity occurs on the secondary market: 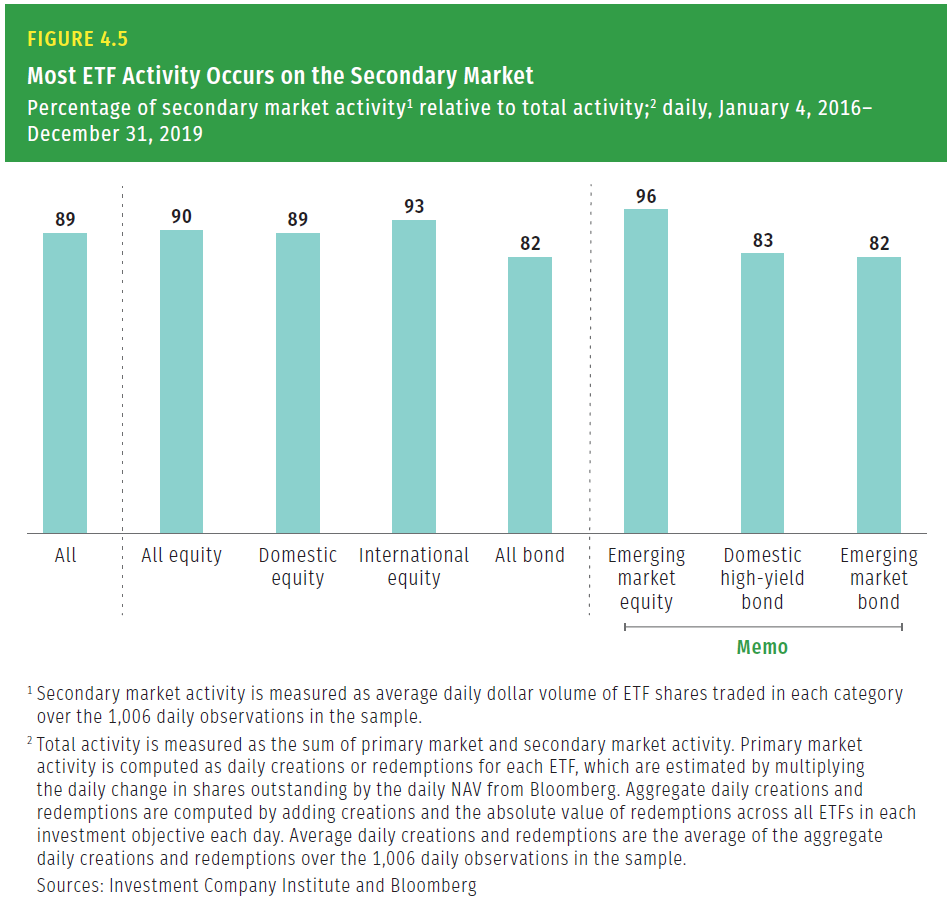 With c.10% of the overall trading occurring on the primary market, ETF trading activity looks to have minimal impact on prices of the underlying shares.

What’s also interesting in the chart above is that there’s still very little impact on the primary market even in supposedly “less efficient” markets, like emerging markets and high-yield bonds.

As well as splitting the data out by asset class, as above, the ICI also examine the effects of ETF trading on the primary market by year. The table below shows that $2.9tr of the $60tr value of company stock traded in 2019 was a result of the ETF creation/redemption process, showing again that just under 5% of primary market transaction volume is from ETFs: 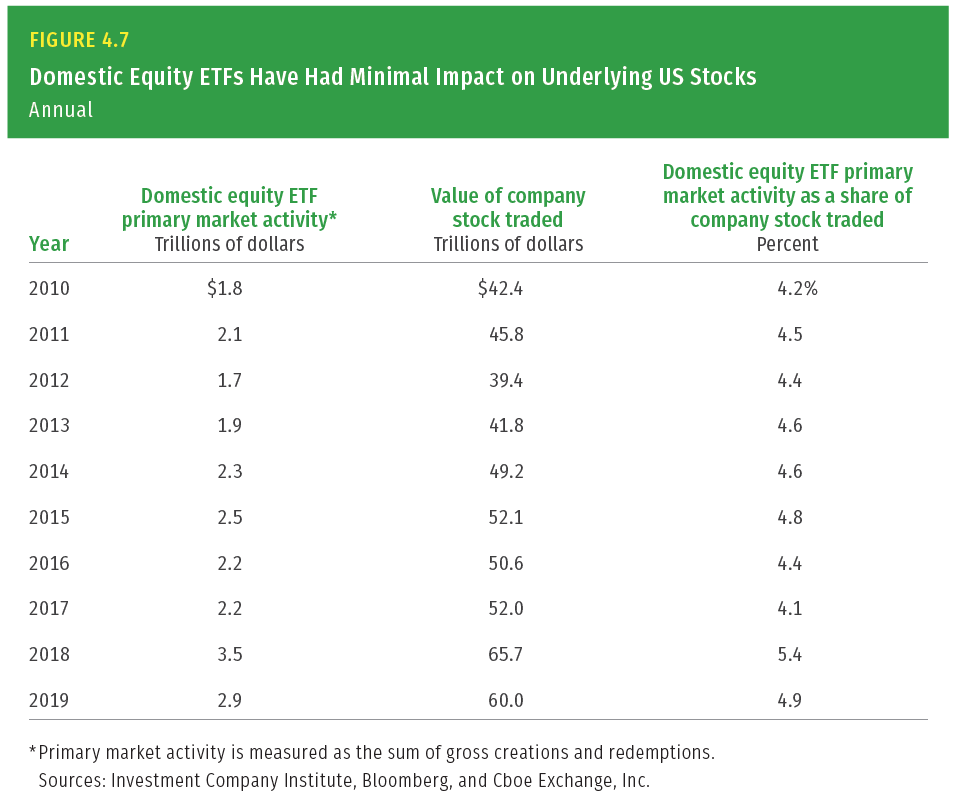 What’s more, despite the huge flows into passive vehicles since 2008, the share of primary market trading volume has only increased by 0.7% between 2010 and 2019.

Blackrock have come to a similar conclusion, finding that passives make up less than 5% of individual stock trading: 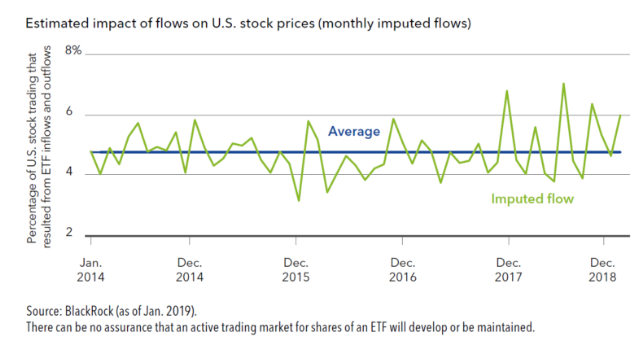 Vanguard have also conducted their own research into trading volumes, and found that for every $1 in ETF trading volume on exchanges, less than 10 cents resulted in primary market transactions in the underlying securities. Put another way, more than 90 per cent of ETF trading did not lead to the buying or selling of the ETF’s underlying investments.

But how does the picture change when we include the effect of index funds?

In a separate research article, Blackrock combine the effects of ETFs and index funds on trading volume, and find that for every $1 traded by index managers roughly $22 is traded by active stock selectors: 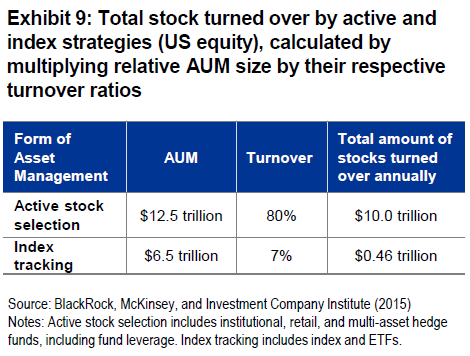 This equates to passives accounting for just over 4% of all trading volume.

Vanguard have also studied the combined effects of both index funds and ETFs on trading volume, and found they account for approximately 1% of overall trading volume on U.S. exchanges, well below the more widely quoted 5% to 7%.

Even after accounting for indexed portfolio management activity outside of registered funds and removing trading volume due to HFT and shares of ETFs, Vanguard estimate that indexing represents less than 5% of overall U.S. trading volume:

This data is confirmed by research by Morningstar, who note that passives only make up less than 5% on any given day of market trading volume.

And also by Charley Ellis, who noted in his book, The Index Revolution, that indexing accounts for less than 5% of trading, with the remaining 95% or so done by active investors.

The bottom line is that plenty of different sources agree that passive investing represents a small fraction of trading volume.

Our final source of evidence for passive’s impact on trading volumes comes from S&P Dow Jones – and I thought it was one of the most interesting pieces.

In their research note, S&P assume that there are two categories of assets, active and passive, and that turnover is 50% annually for the active assets and 10% annually for the passive assets. We’ve seen from the Blackrock study above (Exhibit 9), that in reality active turnover is more like 80% and passive is closer to 7%, so the research already understates active trading and overstates passive trading. 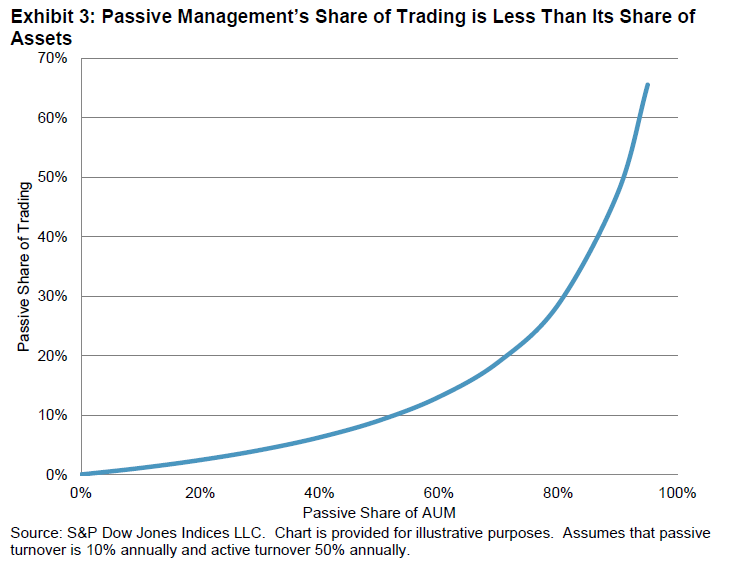 In the previous section on the market share of passives, we found that a number of sources believe roughly 90% of the market could likely be invested in passives before markets start becoming less efficient. In terms of trading volume, this research from S&P Dow Jones shows that passive AUM share would have to rise above 83% before its share of trading rises above 50%. And this is even using extremely conservative estimates.

In other words, even under these favourable assumptions, if passive AUM managed to rise to 90% of the market, half of all trading would still be performed by active investors.

That still sounds pretty efficient to me.

Another fantastic thought experiment on market efficiency can be found in the S&P research paper. It’s so good I think it’s worth quoting in full:

“The S&P 500, like most indices, is float-weighted—in other words, a stock’s weight in the index depends not on its total capitalization, but on the amount of its capitalization that’s available for public investors to buy. Unavailable shares—e.g., founders’ control blocks, or government holdings—are not included in the index. The largest such excluded block in the S&P 500 comes from Walmart Inc., where approximately half of the total capitalization is closely held (by members of the founding Walton family), and is therefore not part of the index.

Effectively, therefore, half of the capitalization of Walmart is held in a one-stock index fund owned by one family. Like other index funds, this figurative one doesn’t trade actively—it just sits there, presumably votes its proxies, and collects its dividends. If, as we’ve estimated, 20% of the U.S. equity market is indexed, that means that an additional 10% of the total capitalization of Walmart is held in funds tracking the S&P 500 and its competitors. Why, one wonders, should we be concerned about that 10%, when the 50% permanently off the market evokes not a whimper? No one, to our knowledge, has ever argued that Walmart is inefficiently priced because half of its cap is closely held.”

50% of Walmart’s stock isn’t ever actively traded, and nobody has complained that Walmart is inefficiently priced. It’s the same with index investing – the shares indexers buy-and-hold are essentially removed from the market, just like the Walton family have done with Walmart shares.

The fact that the remaining shares are actively traded means there are still more than enough market participants to ensure sufficient price discovery.

What about high yield bonds?

Up until now, we’ve focussed mainly on equities and aggregate bond ETFs. But the same story equally applies to the notoriously illiquid high-yield bond market.

Taking the most illiquid section of the bond market, the chart below puts high yield trading volumes in perspective. During 2019, the total trading of high yield bonds averaged $11 billion a day. Secondary market ETF volume stands at $2.3 billion, but as we’ve seen this figure reflects transactions between two parties of already created ETF shares. When it comes to the average daily notional activity that impacts underlying bond prices—the primary market ETF creation or redemption activity—the number stands at just $418 million, or 3.8%: 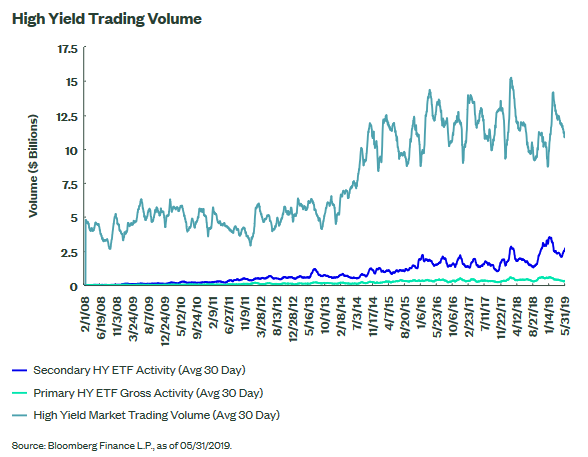 Drilling down, the chart below captures the activity over the past 10 years. The median share of primary market activity was 1.96%, while in the past five years, the median was 2.95%. The max share was 5.9% in early 2019: 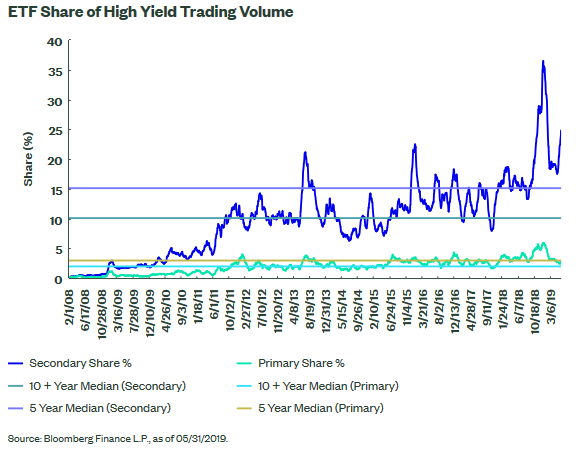 When legendary hedge fund manager Cliff Asness was asked about how much active trading would be needed for accurate price discovery, he answered “It’s probably less than many think”.

While we don’t know exactly how much trading is required for accurate price discovery, we’ve seen that passive investing is barely making a dent in market trading volumes, so prices are still very much safe from distortions – and almost certainly not causing any sort of bubbles.

In this section, we’ve seen that: