This is the fourth part in a series examining the evidence behind the claim that passive investing is causing a bubble.

For the previous part, on whether passive investing is setting prices, click here.

Let’s assume for a moment that there is a relationship between indexing and market crashes. Indexing, for whatever reasons, increases the likelihood of market crashes.

It then stands to reason that given the meteoric rise in indexing since the 1980s, there should have been an equal rise in the frequency and/or magnitude of market crashes. We should have seen at least some signs that drawdowns are becoming more severe.

I don’t think it takes a huge amount of brainpower to point out the flaws in the argument that bubbles and crashes are caused by passive investing, but given how widely the thought is still circling, it seems like some investigation is necessary.

Let’s dive into the evidence.

Getting the obvious stuff out of the way first: starting with the US, whose market has the highest percentage share of passive funds invested, there’s clearly no relationship between passive’s recent growth and bear markets: 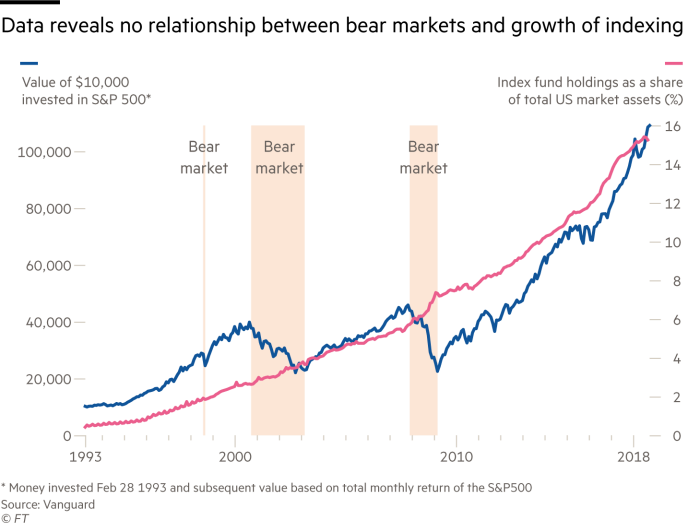 Looking back further, it becomes obvious that the advent of passive investing has nothing to do with why markets crash.

The chart below shows all historic bear markets going back to 1927 against the growth of index funds: 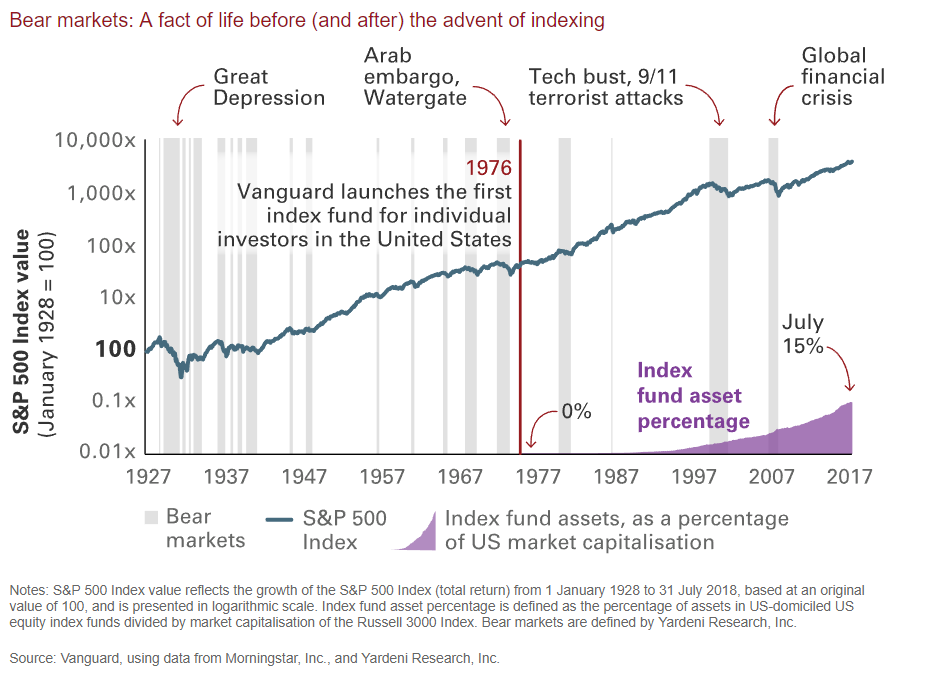 In none of these instances did passive investing – or any specific investment strategy or vehicle – play a material role.

Passive investing has never been more prominent than it is today. So you’d think if passive investing did contribute to the severity of crashes, then today’s drawdowns would be the most severe we’d seen since 1980s.

Yet the ‘coronavirus crash’ seems to be over before it even started. If it were true that passive investing was distorting the market, then it seems likely that as soon as the market started selling off towards the end of February, the market would have quickly spiralled into the vicious cycle of selling which passive investing doomsayers had been predicting.

But it never happened.

What causes a market crash?

Do you think it’s likely they were caused by passive investing?

These crashes, along with all crashes since, were caused by human stock-pickers. Bubbles and crashes have existed long before the idea of an index fund occurred to anybody, and they’ll continue to exist for as long as markets do.

Morgan Housel has an excellent article on why bubbles are inevitable, and how they’re a rational part of functioning markets. They form due to a combination of increasing leverage resulting from investors’ optimism stemming from a stable economy, combined with investors shortening their time horizons to profit from the short-term opportunities created by bubbles:

Imagine a world where bear markets are somehow outlawed. Market stability is all but assured. What would you do? You would buy as many risky assets as you possibly could. You’d bid their valuation up to the point that their return prospects equalled other non-volatile assets, like FDIC-insured bank accounts. That would be the smart, rational thing to do. Everyone would do it. And the seeds of breakdown would, at that moment, start to sprout. The higher valuations become, the more sensitive markets are to being caught off guard from life’s inevitable ability to surprise the hell out of you in ways you never imagined.”

“Bubbles aren’t so much about people irrationally participating in long-term investing. They’re about people somewhat rationally moving toward short-term trading to capture momentum that had been feeding on itself. What do you expect people to do when momentum creates a big short-term return potential? Sit and watch patiently? Never. That’s what Minsky proved. And the short-term traders that flood in operate in an area where the rules governing long-term investing — particularly around valuation — are ignored, because they’re irrelevant to the game being played. Which makes bubbles more rational than they are often portrayed. It’s why we’ll always have them. It’s also why they’re so dangerous.”

In short, bubbles have everything to do with human nature, and nothing at all to do with specific investment strategies or vehicles.

If we now look at volatility rather than market crashes, we can see that passives haven’t been making things worse here, either.

Going back to 1987, where indexing was still in its infancy, every major bout of market volatility was set in motion by a macroeconomic event caused by human nature:

It’s clear that passives have no relationship with either bear markets or increased volatility. So it seems strange they’d be accused of destabilising markets.

No one blamed any of the past market crashes on active funds, even though that’s how most people have historically invested. So why do people think it’s likely that passives are all of a sudden likely to cause crashes?

As we saw in this article, passive funds are invested in exactly the same securities as active funds. The aggregate of all active funds is, by definition, the market, and is what passive investments track.

In fact, it may very well be that passive investors help to ameliorate the effects of market crashes.

The study, ‘The Shift From Active to Passive Investing: Potential Risks to Financial Stability?’ investigates whether the trend toward passive investing has increased market risks. The authors find that investor flows for passive mutual funds are less reactive to fund performance than the flows of active funds. The result is that passive funds face a lower risk of destabilising redemptions in episodes of financial stress.

So passive fund investors were buying when others were selling.

Vanguard have found a similar phenomenon. The chart below shows that in 2000-02 and 2008-09, passive investors actually bought, rather than sold, index funds, which experienced significant cash inflows: 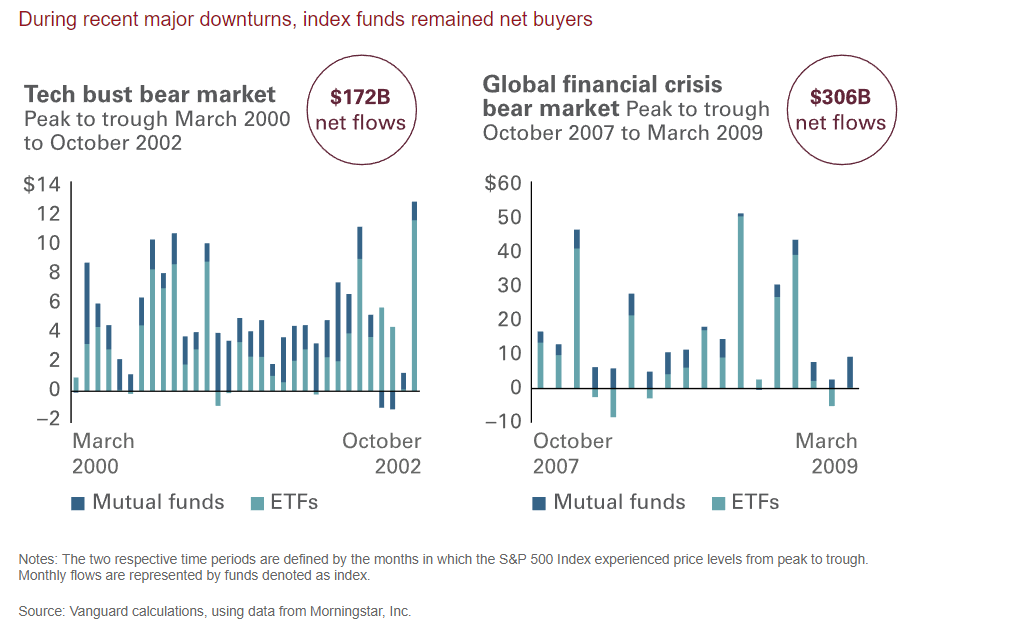 The data show that passive investors continue to buy the market when the rest of the market is selling.

One caveat here. We’ve already seen that passives’ impact on prices is virtually non-existent. That’s the central idea behind this whole series. However, looking at the fund flows above, it’s interesting to see that even if passives were in some way affecting prices, passives wouldn’t be magnifying the selloffs, they’d likely be doing the opposite, and supporting equity prices during times of market stress.