This week I thought I’d give some love to another type of pension scheme which tends to fly under the radar – alongside the AVC pension which I recently created a separate guide for.

It’s known as a SSAS pension, and it’s rarely talked about. But for those who can make use of it, it has some juicy benefits over a regular pension, including some significant tax benefits.

And aren’t tax benefits the best kind of benefits?

What is a SSAS pension?

A SSAS is set up by the directors of the company, mainly for two reasons: 1) to take advantage of the increased flexibility of allowable investments compared to a more traditional pension (like an occupational DC pension scheme or a SIPP), and 2) for the favourable tax treatment. Both of these are covered below.

Membership of the scheme is limited to no more than 11 members (hence the ‘small’ in SSAS), and the members are often company directors or senior executives, but they can be open to other employees and family members.

Each member usually becomes a trustee, and so has input over where to invest the money.

This is the main reason it’s so rarely discussed in personal finance circles – as you can imagine, due to the restriction on the number of members, these schemes are usually only appropriate for small businesses and start-ups.

SSAS pensions can invest in the usual assets eligible for pensions (funds/stocks/bonds), but in addition are permitted to invest in:

The SSAS’ ability to invest in commercial property is one of its main benefits, because it can include the company’s own property. The SSAS can buy the property, then lease it back to the members. This has the amazing benefit of being able to keep the business’ property within a tax-sheltered account, meaning there are no capital gains taxes to pay on the property’s sale.

(NB: Not all SSAS providers will allow each of these options. It’s important to check the rules of your SSAS provider before setting it up.)

2) The SSAS can borrow and lend

A second benefit of a SSAS is its ability to borrow up to 50% of the scheme’s net assets, which can be used to buy property – either the entire property or a portion.

For example, the SSAS might borrow in the form of a mortgage, to purchase of the company’s premises. The mortgage repayments might then be covered, in all or in part, by the rental income the company pays the SSAS.

On the lending side, the SSAS can also lend money – up to 50% of the net value of the fund can be loaned.

For example, the SSAS is able to lend money back to the company and buy the company’s shares.

In terms of who it can lend to, the SSAS can loan to its sponsoring employer, or any party unconnected to the member (e.g. if it’s your firm’s SSAS, the firm or other external parties can receive the loan funds, but you personally can’t).

However, there are a few rules stipulated by HMRC governing the use of SSAS pension loans:

The chief benefit of using a SSAS pension wrapper to borrow/lend is that it’s beneficial for tax reasons. Borrowing and lending within a SSAS comes with tax advantages, as loan interest repayments are a deductible business expense, and loan interest received by the SSAS is not subject to tax.

Although the first two benefits are also mainly tax benefits, it’s worth remembering that a SSAS is still a type of pension, so offers the same tax benefits as other occupational pension schemes. For member contributions, basic rate taxpayers get a 25% tax top up, while higher rate taxpayers can claim additional relief on their tax return. Contributions paid into the scheme by the employer also qualify for tax relief which can help reduce its total tax liability.

As it’s a pension scheme, the assets and investments within the scheme have no tax liability (i.e. are not subject to UK income tax and capital gains tax). This means any commercial property in the scheme – including the company’s own property – is exempt from capital gains tax on the final sale. In addition, any rent paid by tenants of the commercial property is free from income tax.

The main disadvantage of a SSAS is that no more than 11 members can join an SSAS pension scheme (in contrast to a regular occupational pension schemes which has no limit on the number of members).

Because it’s a type of pension, contributions to the SSAS (including those from a sponsoring employer) count towards your annual pension contribution allowance, which is currently £40,000 gross. Whether or not this is a disadvantage or not depends on whether you’re close to maxing out your pension allowance. Given the size of most people’s pension pots, which I looked at in this post on the average UK pension pots, this probably isn’t an issue for most investors.

The members of the SSAS pension scheme are responsible for the adhering to the legal framework surrounding the management of the pension, ensuring the scheme is run in line with pension law.

This can be a large responsibility, given the headline figure for any pension transaction which breaches HMRC rules is a fine of 55% of that transaction.

The trustees also have the added responsibility of handling all reporting to HMRC and arranging tax relief collection. However, it’s possible to appoint a scheme administrator to help with this.

Let’s take a basic example, and say you and a business partner together own a small business which has used up its past tax allowances, and you’re now facing a corporation tax bill.

You have the choice of opening up a SSAS, and using the contributions to buy some equipment for the business and invest for retirement.

By setting up a SSAS and each contributing the maximum £40,000, as trustees of the scheme, you could lend £40,000 back to the company on commercial and secured terms, so the company can buy its new equipment. The remaining £40,000 can be invested in the pension wrapper.

This will reduce your corporation tax bill, leaving more profits retained by the business: 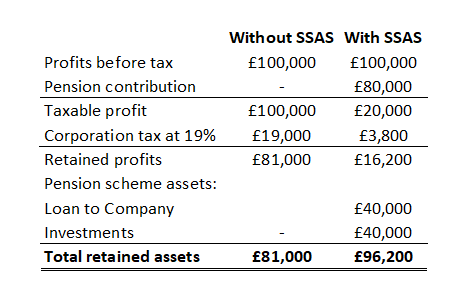 Using the SSAS pension results in an extra £15,200 retained by the business, and as an added benefit, the interest received on the loan in the SSAS wrapper isn’t subject to tax.

How do I set up a SSAS pension?

There are 10 steps to setting up a SSAS:

Hopefully this short guide has given you a good idea of whether a SSAS pension is right for you. If you have any questions, feel free to let me know in the comments.

I have heard the term, but never really investigated it

What is going through my mind is whether this could be set up as a kind of extended family SIPP, where members of a family contribute their pension contributions, which can then be invested and managed by one person, which would avoid having to manage each individuals SIPP

but I suspect that without a company carrying on a trade, HMRC would not register the SSAS

Got to be honest – never in a million years expected to see a SSAS article here. You’ve described & explained it better than most IFAs can!

Worth pointing out that (a) a professional trustee should be a MUST HAVE, too many easy ways to fall foul of HMRC, and (b) SIPPs generally can tick most of the same boxes (other than lend money) at a smaller cost.

If you’re a business owner the ability to buy your premises with the SIPP/SSAS then rent it from your pension can be fantastic planning.

Neither did I!
I’ve received a few pension questions recently, so I’ve got another pension-type post coming in a couple of weeks… I’ve had to do a lot of reading on pensions recently! I try not to stray too far into the personal finance/financial planning arena, given my expertise lands more on the investments side, but writing about this stuff is a good learning experience for me as well.
And thanks for the SSAS tips!