This is the second part in a series examining the evidence behind the claim that passive investing is causing a bubble.

For the first part, on Sharpe’ Arithmetic of Active Management, click here.

For any investment strategy to distort the market, it must be big.

And, despite all the clamour around the how quickly passive investing has grown, the evidence suggests that it’s still simply not a large enough part of the market to start distorting prices.

According to the latest Investment Company Institute Factbook, index funds grew to just under 40% of the US fund market as at the end of 2019: 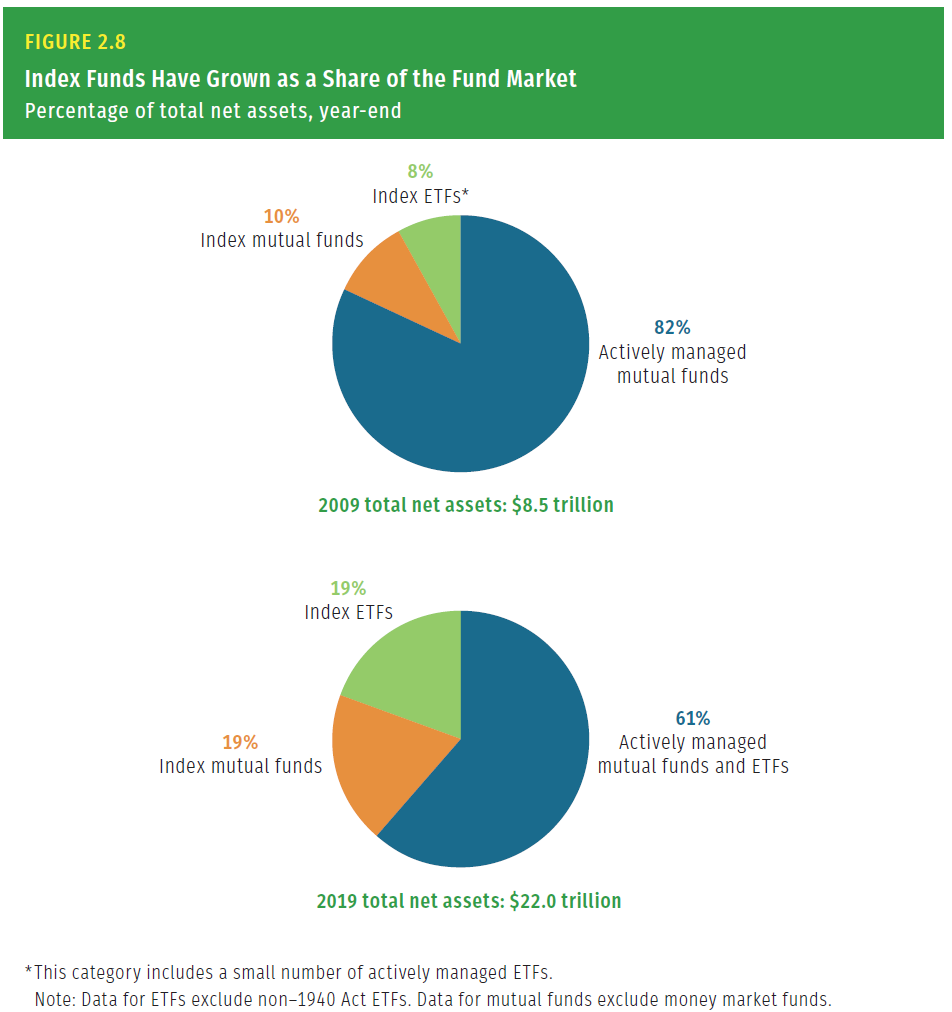 While this looks like a scary statistic, we need to put it into context. It’s easy to forget that the fund market is still only a small part of the overall market.

If you include other forms of stock ownership, index funds and ETFs hold only 15% of US stock. Actively managed domestic equity mutual funds and ETFs hold another 15%, while other investors—including hedge funds, pension funds, life insurance companies, and individuals—hold the remaining 70%: 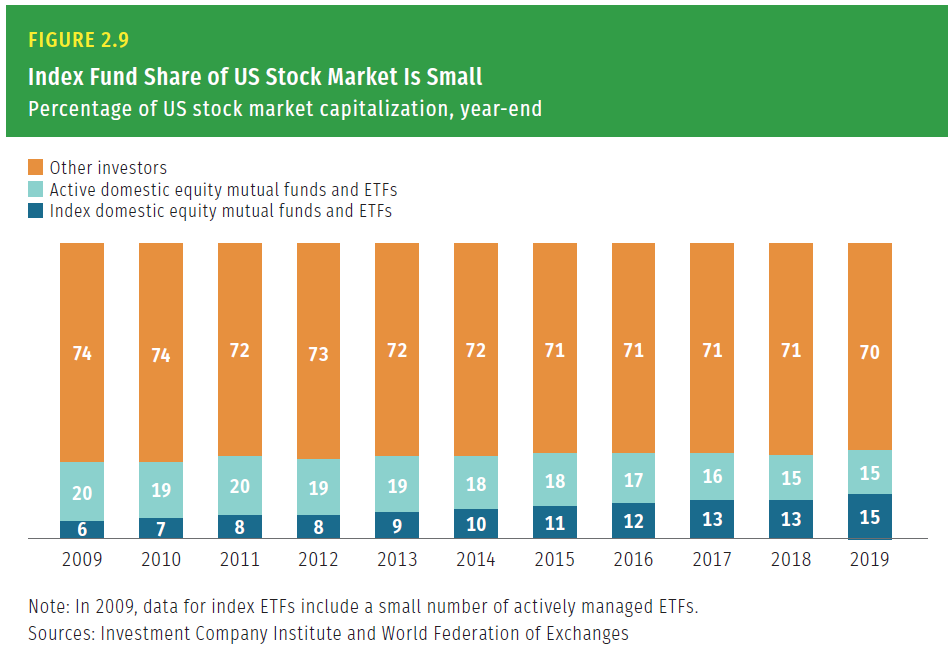 This 15% figure agrees with what John Bogle found, with the following taken from his final book, ‘Stay the Course’:

“Yes, U.S. index funds have grown to huge size, with their holdings of U.S. stocks doubling from 3.3% of their total market value in 2002, to 6.8% in 2009, and then doubling again to an estimated 14% in 2018. Other mutual funds now hold an estimated 20% of corporate shares, bringing the mutual fund total to almost 35%, the nation’s most dominant single holder of common stocks.”

And also agrees to what Vanguard found:

“According to Fran Kinnery, global head of portfolio construction at Vanguard, there is about $35.6 trillion in publicly traded shares in the U.S. That $4.271 trillion in passive index funds amounts to a 12% share of the total equity market. That’s about double what it was a decade ago, but far from dominant.”

But these numbers are for the US. What about for global investors?

In probably the most comprehensive look at the market share of indexing I’ve seen, Blackrock found than 17.5% of global equities are indexed, either directly or indirectly. This 17.5%, alongside traditional index funds and ETFs, also includes the effects of institutional indexing and internal indexing: 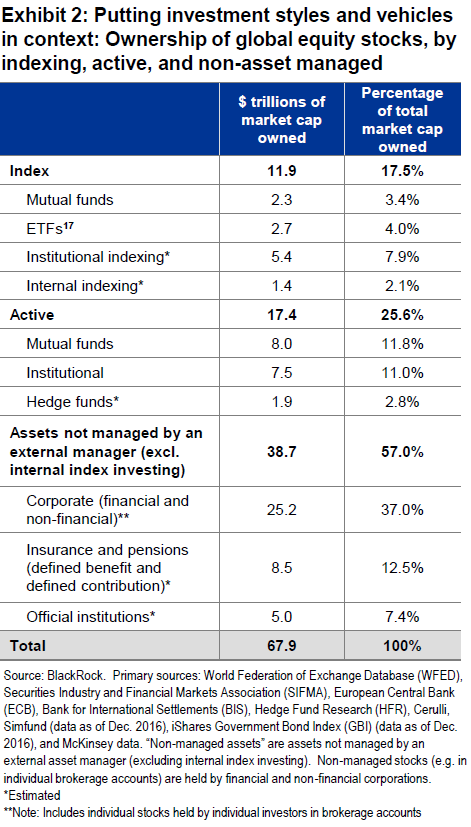 Blackrock break this down further, and show that the relative proportion of investment via index funds is significantly lower in Europe, the Middle East, and Africa (EMEA) than it is in the US: 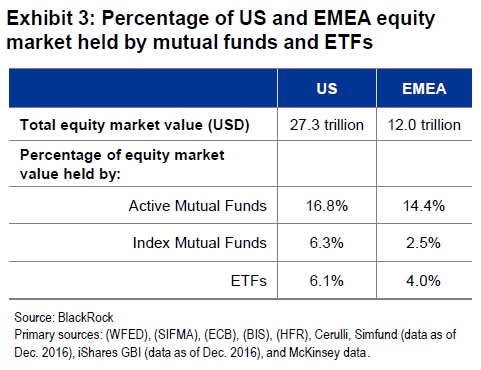 These figures agree with the 13% figure for US index funds and ETFs we’ve already seen.

They also show that not only is equity investment via index funds small compared to that of active mutual funds, but that traditional active mutual funds themselves represent just a small percentage of the overall equity market –at 16.8% in the US, 14.4% in EMEA, and 11.8% globally.

This paper was produced in October 2017, so I imagine the data has changed since then, but it’s at least a good indicator of the relative size of all the different forms of investment styles and vehicles.

Blackrock’s figure of 17.5% is the highest out of all the estimates, due to the addition of their estimates for institutional and internal indexing, alongside the data for traditional index funds and ETFs.

Let’s assume Blackrock’s estimates are approximately right, and passives make up around 20% of the equity market. That’s a decent chunk, and one which has undoubtedly grown quickly, but it’s a far cry from being high enough to affect price discovery.

Indexing and the bond market

Using the Securities Industry and Financial Markets Association Capital Markets Fact Book, we learn the total global bond market value outstanding is $102.8 trillion. According to Morningstar, $1.45 trillion of that is in passive bond funds. In other words the passive share is only 1.4%.

An asset class that accounts for just 2% of the market can hardly be responsible for a systemic impact that influences bond prices, or creates distortion:

But what about in the high yield bond market? It’s a notoriously illiquid market, but does passive investing represent a larger part?

Again, the answer is no.

According to State Street, active strategies account for 20% of the high yield market, while index strategies stand at a paltry 3.5%: 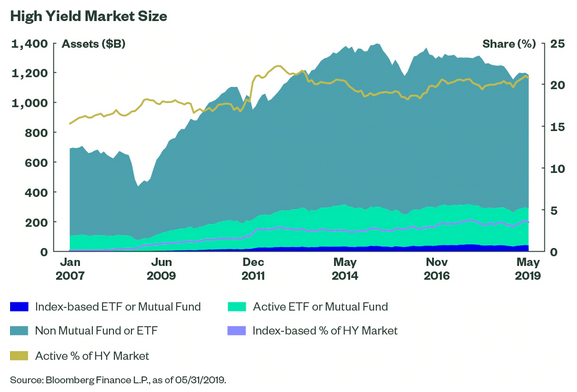 How big do passives need to get to start impacting price discovery?

Price discovery is the process by which competing buyers and sellers use all available public information to determine the price of a security.

The theory goes that if passives start becoming too large a portion of the market, prices will start becoming more and more divorced from reality. But when, if ever, will we hit this point?

Research by Andrew Lo, Director of the MIT Laboratory for Financial Engineering, suggests that markets require relatively few active managers for price discovery to work properly. Based upon MIT’s research and simulations, the price discovery process could continue to function properly even if passive strategies represented around 90% of total investment assets.

This 90% figure seems to be a common one.

John Bogle also believes that the 90% figure sounds right, as does the economist/author Burton Malkiel. Cliff Asness, the famed hedge fund manager, hasn’t put a number on it, but thinks that whatever the exact number is “we’re not close yet”.

Larry Swedroe offers a fantastic thought experiment for why the market can function perfectly efficiently with only a small number of active investors.

“Consider an auction for art with 1,000 unsophisticated participants and just two sophisticated art historians bidding on behalf of wealthy individuals. Will the two sophisticates be able to buy a Picasso at a cheap price because there are so many unsophisticated buyers? Or, is it more likely that the two experts will engage in a bidding war and set the price at a fair market value? You don’t need many experts to set prices efficiently.”