What if I invest right before a market crash?

It’s one of the most worrying things that goes through your head before investing.

As you start to think about putting your cash in the market, you start paying more attention to the news headlines. They might be relevant to you now, after all. And as you read the news, the scary headlines start to stand out just that little bit more. As we know, there’s always a story that makes it sound as though the next crash is coming, so there’s no lack of scary news fodder to grab your attention. Exacerbated by your memories of the last financial crash, and having opened the door to the cacophony of doomsayers screaming from the headlines, the niggling question can’t help but burrow its way to the front of your mind: “What if this is the top? What if I invest right before the market crashes?”

Let’s have a look.

What if you were the world’s worst investor?

Let’s assume you are the world’s worst investor, at least as far as timing the market goes. You have a lump sum to invest, and you’re only able to invest at market peaks, right before the market drops 20% or more. What would your return be if you only invested at those peaks?

Using data going back to 1926, the chart below shows the returns you would’ve achieved had you invested at the market top preceding every bear market (a 20% decline or more). Unsurprisingly, investing right before market crashes provides some pretty terrible short term returns. The 2008 financial crisis had a particularly tough one-year drawdown, but still nothing compares to the 3 year drawdown of 1929 – an annualised loss of 33% per year, resulting in a drawdown of over 84%.

But what’s interesting is that the longer you stay invested, the more likely it is that these terrible short term returns will converge on the long-term average return. Given that the long term average for the S&P has been almost 10% a year, that’s not too bad at all.

What’s important to note is that even if you’d invested at literally the worst possible time before any of the major market crashes since 1926, if your holding period was long enough, your returns would have ended up rising to the long-term average.

The key was to maintain a long holding period, and stay invested.

Whilst we all know that staying invested is easy on paper, in the midst of a 50% drawdown when everyone around you is panicking, it’s infinitely more difficult to do in practice.

What if you were the world’s best investor?

Now let’s take the other side of the coin.

What if you were an investing savant, and had a crystal ball which allowed you to invest only at the bottom of each bear market? How much better off would you have been? Buying at the market bottoms has clearly provided some unbelievable short terms returns. Timing the bottom of the 1929 crash would’ve made you an investing hero, and you probably would’ve been able to dine out on that single trade for the rest of your investing career.

The longer you stay invested, the more likely your returns will converge on the long-term average.

In the long run, those with perfect timing have almost the same returns as those with the worst possible timing.

Now let’s put some numbers to it.

If we take the 4 bear markets which we have the longest subsequent return data for (the crashes in 1929, 1946, 1962, and 1968 all have 45 years of subsequent return data), we can see what the difference in annualised returns would have been between investing at the peak before each crash versus right at the bottom of the crash.

It’s worth remembering that this is the difference between the absolute best timing and the absolute worst timing.

Interestingly, you still would’ve been much better off picking the bottom of the 1929 crash. Mainly thanks to the sheer magnitude of the crash, which hasn’t even been close to happening again since. Thinking about it, comparing the returns of someone investing right before a 90% crash versus someone who manages to pick the exact bottom of that crash, the difference is likely to be pretty big, even over the longer term.

The difference in returns between the absolute best timing and the absolute worst timing of these three drawdowns are all surprisingly small.

In the long run, those with perfect timing have almost the same returns as those with the worst possible timing.

The reality is that we’re unlikely to either invest right at the top, or right at the bottom. We’ll probably invest somewhere in the middle. We’re also unlikely to invest a meaningful lump sum all at once, instead preferring to drip-feed cash into the market over time (known as pound-cost averaging). So we’re unlikely to suffer the worst possible outcome from an impending crash. Even if we do, we’ve seen that as long we can stay invested, the worst outcomes end up being very similar to the best.

The key message is that even if we invest at the worst possible time, our time horizon can save us – if we’re able to stay the course for the long run.  So we don’t need to worry so much about being the world’s worst investor, or spend too much effort trying to be the world’s best.

The next post in the series looks at the difficulties that sitting in cash creates for investors.

Hello! Excellent article! I wanted to ask if there is a general timeframe for an investment to begin converging toward the average market performance? About how long does it take for the relative underperformance of the poor market timer to catch up to the bottom timing strategy?

Hi Derek,
Someone who’s unlucky enough to invest at the peak will always underperform someone who’s lucky enough to invest right at the bottom – all else equal. For example, if you invested £100 at the top, and I invested £100 after the market had fallen 50%, I’d always have a portfolio twice the size of yours. That’s just how the brutal maths works!

Sure, over time the annualised returns will start averaging out to looking similar on paper, but in the ending portfolio values one will always be twice the other.

Rather than looking at it in relative terms (one person vs another), which is a recipe for unhappiness in investing (someone will always have better returns than you!), I like thinking about timing investments in terms of the chart from this post: 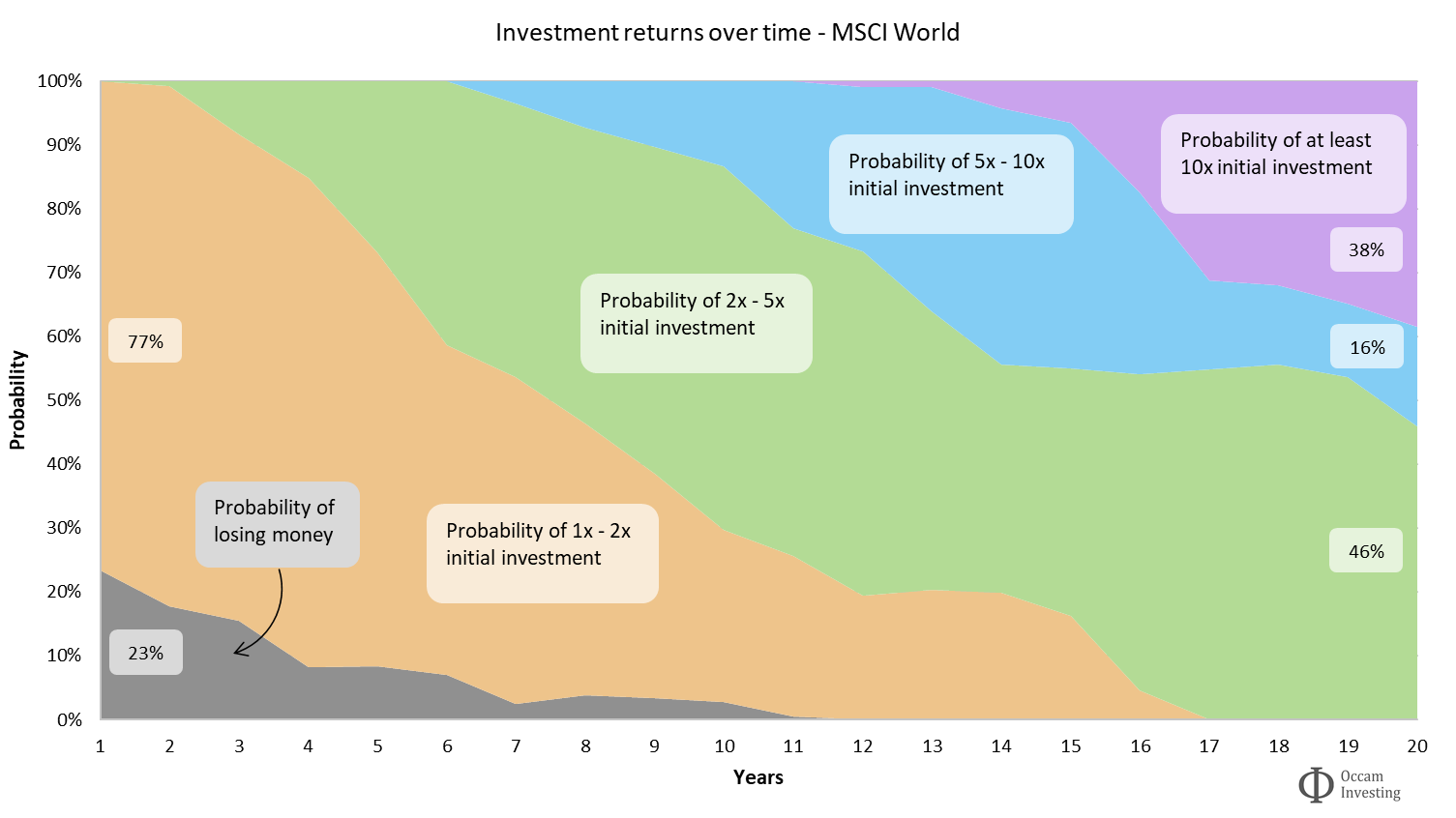 .
Even if you’d invested at the worst time, there’s never been a period where you would’ve lost money if you’d held on for 12 years. And in the best case scenario after 12 years, you could’ve earned between 5x-10x your investment. The longer you hold on for, the higher multiples you’ll earn, even if you’re terrible at timing your initial investment.

And if you’re really worried about investing before a crash, you can drip feed into the market, which I’ve covered in this post.