Why do stocks go up?

It sounds like a pretty basic question, doesn’t it? We all know that, in the long run, markets rise over time. But answering why stocks go up is surprisingly difficult.

At its most basic level, a stock represents ownership of a tiny fraction of a company. And with that ownership comes the right to a slice of the company’s profits.

But what causes the price of a share to go up? 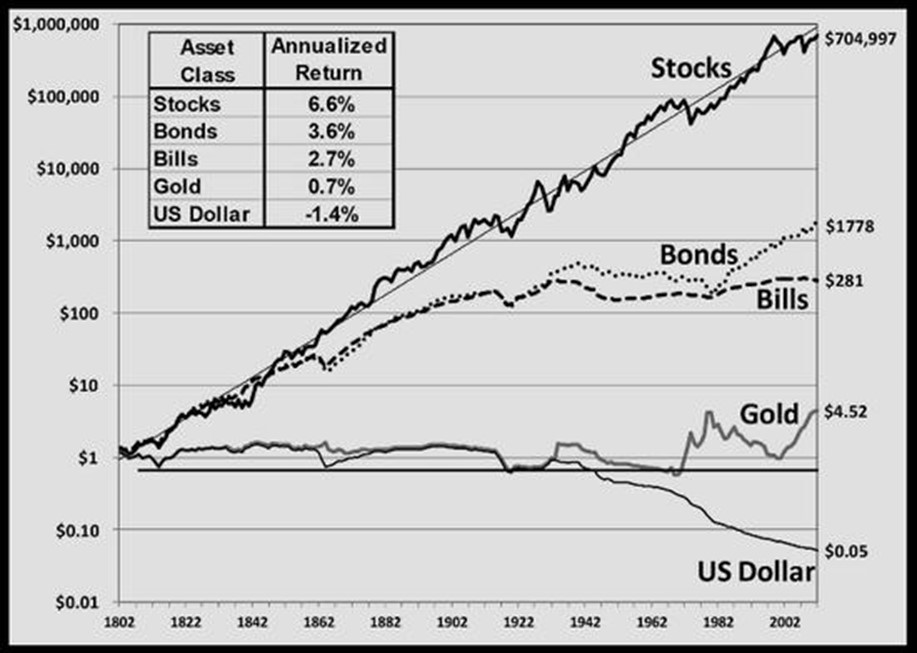 In the short run, the price of a share is dependent on what the market believes the present value of the company’s future profits is. The share price of a company represents the weighted average guess of every market participant for what the company’s future profits are going to be, and what it’d worth paying for them today. In technical terms, a company’s share price represents the present value of its future cashflows.

But all the market is doing when it’s constantly pricing the shares of a company is making bets on future cashflows. It’s not actually affecting the underlying cashflows at all. It’s like betting on the outcome of a race – your bets don’t affect the result. (But let’s not forget that investing isn’t the same as gambling).

In the long run, a company’s share price can only be determined by one thing: the actual amount of cash it generates.

Markets aren’t always perfectly rational, and can hugely over- or under-price a company’s future cashflows in the short term. Just look at the tech bubble – people were paying extortionately high prices for almost no current earnings, and were betting entirely on highly uncertain future earnings. But in the long run, once the companies delivered no earnings, the share prices crashed to reflect more realistic expectations of future cashflows (in many cases, zero).

The market can be very wrong in the short term, which is one of the reasons why short term market movements are impossible to predict.

But in the long term, the market’s opinions are irrelevant. It’s the company’s earnings themselves which drive the share price.

As the legendary investor Ben Graham used to say, “In the short run, the market is a voting machine. But in the long run, it is a weighing machine”

So in the long run, shares go up because companies continue to generate cash. As long as companies generate more cash in the future than they’re generating now, their share prices will go up.

Why will companies generate more cash in the future?

What’s to say that companies will generate more cash in the future than they do today? Given that stock prices are the present value of their future cashflows, in order for the market as a whole to continue to rise, companies must continue to increase their cashflows.

Why should this happen?

The short answer is: technology.

Technology makes companies more efficient. Companies are able to increase their outputs with fewer inputs, which is incentivised through their drive to maximise profits. As technology improves, it makes almost every industry more productive.

Commercial space flight’s an especially interesting one. If we end up colonising other planets, then that opens up an entirely new opportunity for capitalism.

Of course, the question is, when’s this all going to stop?

When are we going to stop making incredible technological discoveries and stop improving our society? Because it’s only when we reach this point where markets will stop going up.

For this to happen, either:

If most companies die, why do markets keep rising?

Of course, technology isn’t a force for good for everyone.

It has, and will continue to, render entire industries obsolete. When was the last time you spoke to a switchboard operator, human computer, or Blockbuster employee?

Technology is one of the major driving forces behind the brutal fact that most companies eventually go bust.

So far in this article we’ve seen that markets go up because 1) companies generate cash, and 2) companies will likely continue to generate more cash in the future.

But if most companies go bust, then why does the market keep rising?

The answer is a surprisingly simple one.

Markets don’t rise because all stocks in the market rise. Markets rise because the 1% of hugely successful companies generate so much cash that it compensates for 99% of companies which fail.

This isn’t just theory, either. In 2018, a lecturer at Arizona State University authored a paper titled Do Stocks Outperform Treasury Bills? Looking at the US stock market, he found that only 4% of listed companies explain the net gain for the entire US stock market since 1926.

In 2019, he extended his research to look at global stocks, rather than just the US, and found that results were even more skewed.

He found that a mere 1.3% of firms accounted for all the global stock market wealth creation between 1990 and 2018.

And there’s plenty more evidence to confirm this finding. The idea that stock returns are positively skewed (the technical term for the idea that a small number of firms are responsible for all the gains) was originally reported in the 1998 inaugural issue of the Journal of Portfolio Management, in an article titled “Why Active Managers Underperform the S&P 500: The Impact of Size and Skewness”. The theme has been revisited many times, and has been confirmed by the likes of Vanguard, S&P, Morningstar, and other academic researchers. 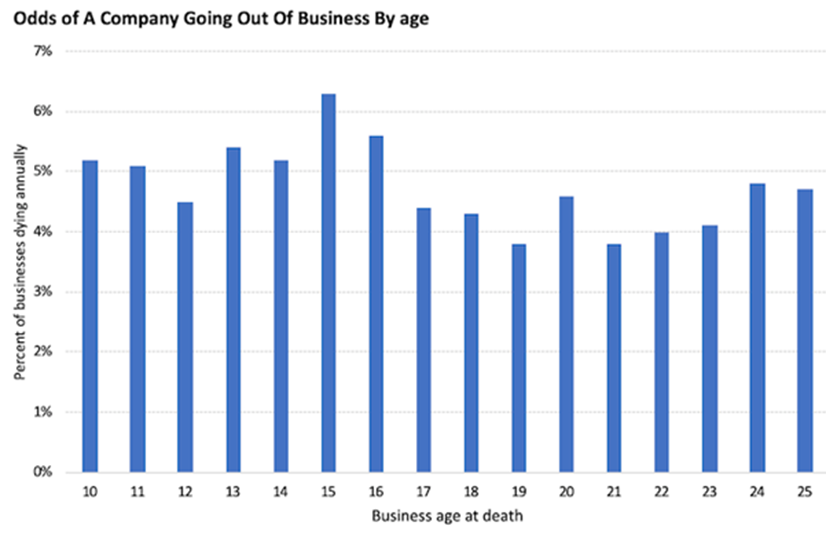 This isn’t just useful for understanding why markets go up, it’s also useful for informing your investment strategy.

If only 1% of stocks generate all the gains, the odds are stacked heavily against you if you try and pick which stocks are going to be part of that 1%. It’s therefore a great argument for taking a passive investing approach and simply buying the market. As the late great Jack Bogle was fond of saying, “Don’t look for the needle in the haystack. Just buy the haystack.”

Before we wrap up, it’s worth clarifying one point which I’ve seen a few times as an explanation for why stocks go up.

One argument I’ve seen for why stocks go up over time is based on risk.

It’s true that stocks are riskier than bonds. You’re less likely to get your cash back if you’re invested in stocks and something goes wrong. The cashflows from stocks are far less certain than they are with bonds. Companies can, and often do, cut their dividends. And when a company goes bust, bondholders rank higher than equity holders in the repayment structure, so are more likely to get their initial investment back.

Stocks are a promise for an extremely unknown future stream of earnings. Bonds, on the other hand, are simply a loan. This makes equities riskier than bonds.

I’ve often heard it said that this is the reason stocks rise more than bonds – because they’re riskier.

But I’m not sure I buy this argument.

When it comes to investing, risk is necessary for long-term returns, but not sufficient. And that’s an important distinction.

Just because something is risky, doesn’t mean it will go up. I could put all my money into a tiny speculative AIM listed stock – it’s a huge risk putting all my eggs in one basket, but that doesn’t mean all the extra risk I’m taking corresponds to extra return. In fact, it’s a terrible idea, because all that extra risk I’m taking increases the chances of losing all my money.

More risk doesn’t always equal more return. There’s nothing inherent in the act of taking more risk in the market which correlates with a higher return.

But you can’t earn a high return without taking risk.

So I tend to think about risk and return the other way round. Stocks provide higher returns than bonds, and as a result, they come with higher risk. It’s not the high risk which causes the returns, it’s the high returns which cause the high risk.

It’s a bit of a head-scratcher, and I’m sure a lot of readers will consider it a moot point, but I think it’s useful for framing the risk/return investing heuristic. I often hear from people who want to put substantial portions of their portfolios into single stocks, citing “no risk, no return” as the reason. Although they’re taking high risk, they’re not increasing their chances of high return.

Cranking the risk dial up to 11 doesn’t always increase returns, but cranking up the returns dial to 11 always increases risk. This is why you should always be wary of any investment product promising high returns with low risk.

It’s perfectly possible to have an investment high risk and low return, but vice versa is impossible.

Stocks go up because:

The idea that markets rise over time isn’t true at the stock level (as most companies die), but it is true at an index level. By investing in the market, you’re betting that the world will continue to increase productivity as companies try to maximise profits, and the world will become a more efficient place than it was before.

The fact that these productivity enhancements are likely to be translated into stock returns by only a tiny fraction of companies is a ringing endorsement for the passive investing approach. If only 1% of stocks generate all the gains, the odds are stacked heavily against you if you try to pick which stocks are going to be part of that 1%. It’s one of the many reasons why passive investing continues to outperform active management over the long term.

And for those wondering how to buy the haystack, I’ve written a comprehensive guide to the best way to invest in the market through Vanguard funds.

I still think we’re incredibly fortunate to live during a time where we’re able to invest in the global economy with under £100, for the staggeringly low price of less than 0.3% per year. The market has never been cheaper or more accessible, and the benefits of long-term investing are open to more people than ever.

Investing for the long term does require a healthy dose of optimism, though. It requires a belief that the world will continue to improve, and that human ingenuity, ambition, and efficiency will continue to make the world a more productive place in the future.

Which is why one of my favourite sayings in investing is “Save like a pessimist, invest like an optimist.”